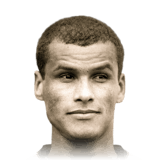 what can i say? this rivaldo made an average gold 1 player to an elite 2 player... he is sooo underrated in this fifa because he got the "2 star weak foot" but when this guy gets the ball on his left foot... oh my dear god it is always a goal, he cant miss, seriously he cant just miss when he gets it on his left. it doesn´t just stop here, he is 186cm so he can head the ball with his height no matter what and top of that he got 81 strength so no way he can get bullied by the opponents defenders. dribbling? i dont wanna talk about it man, he is sooooo good on the bal that you cant get the ball ahaha. passing is just phenomenal every freaking pass is successful. the pace is not a problem, just give my man a hunter and there you go you will not be able to catch him, no way. not just the offensive stats, this guys interception are surprisingly amazing he can intercept every ball with his long leg. the stamina aint a problem, he can play 90 minutes every match.

so my advice to you guys: if you need a cam that can change your games then you need this beast because he got it all for a cam. so guys go and buy this hidden gem in fifa.

I'm a below average player, alright? I'm in 7th div and finishing in s1/g3 in fut champs. To be honest with you, when I dropped Rivaldo out of Prime Icon Pack for Icon Swaps I was furious, because it could've been Ronaldinho, who is my favourite player of all times. First games were awful, mostly because of this reason. He is a bit too slim & lanky in game and he often gets pushed easily. I just thought he is a really bad drop for first few days. Oh boy, how wrong I was.

The biggest power of Rivaldo are his finesse shots with left foot. I swear, this card has aimbot installed, every finesse shot made from the penalty box is a goal. His agility and dribbling at overall is great, he has the ball glued to his shoes, although without the ball he seems way less agile. Game changer for my team indeed.