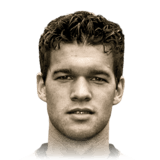 i got this ballack from an any icon player pack. at first i was kinda disappointed coz of 68 agility and 70 balance. but , after slapping an engine on him , his left stick dribbling is actually all right ,combined with the 4 * sm and 4* wf . i use him as a left cdm in 4231 and hes actually amazing . his 81 defending stat is just a lie. he probably defends better than vvd. the most noticeable thing about this card though is the 99 strength. he bullies everyone off the ball , including totssf rolando and messi , and fcking summer heat dembele.his basically runs my midfield in my team . his pace and shooting is good enough , although his sprint speed isnt that great. he scores every once in awhile , and i dont recommend using finesse shot with him. just full power that baby up.