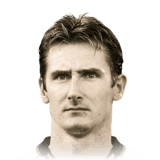 First of all I want to warn you guys who thinks this Klose is some kind of a Fifa 19 flashback Zlatan, who will score headers as consistent as messi can dribble to his left.

This is not, and I empathize NOT a meta card.

He will outrun most CB if you slap a hunter or a Hawk on him, but not everyone.

He will out muscle most CB but not everyone.

So what is his style of play you might ask? Why did I even write this review if start this review in this kind of trivializing manner?

Its because he is a hidden gem, and i just dont want you to use him the wrong way.

Seeing he has a high finishing rating (93) I first started using him by trying to simply shoot the ball without using any kind of special shot just as you enter the penalty area. I missed 9 times out of 10.

Full of fury since i had sold my efficient IF 92 Salah to get what i thought would be an easy ride to success with Klose, i started to try a different strategy.

Finesse shots had always worked with my previous strikers but even there it was to no avail. Having 70 curve would not help in that regard and I saw chance after chance being thrown away by poorly executed finesse shots to the crowd.

What kind of a goal scoring king cant score a goal? Had I thrown my hard earned fifa coins right into the abyss of the EA tax coffin? I began to despair.

Yes i could finish the random corner opportunity with a finely placed header , but surely that was not enough to turn the tides in my favor. The moments in between where too long and depressing.

Then, as manna falling from heaven, world cup king revealed his true nature.

How he scores is through using the driven (LT/L2) shot to the corners. Its money everytime. I suppose its because his shot power is average and long shot is, and he needs a special shot to boost that stat, since his finishing is already high.

Bear this in mind and he will work wonders for you.

Efficient finisher once you learn his mechanics. Use as a holding striker, dont be faster than your wing guys. Use your strength.