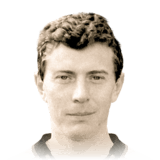 if u want him in ur team u need a really good cam with good dribbling,good pace and passing. butra(the nickname i gave him) is a really good finisher from everywhere on the pitch, he never misses a shot thats crazy both right foot and left foot, u cant really count on him to win 1v1 against the defence with that low a** strength and 3 star skills but thats when ur cam(mine was insigne scream with free roam and sstay forward together with neymar lam with free roam) this 3 r a perfect match, but u dont have strength at all so u can bring a nice aggressive player to the ram

if u r thinking about buying cr7,DONT, this card is 10 times better if u r looking for a player with good dribbling and pace.

The main reason I purchased this beast was to get a strong link to David Villa. I wasn't ready for how insane he was going to be. Playing as a CAM in a 3-5-2 I decided to put an engine on him, giving him 97 pace and 97 dribbling. This is definitely the greatest part about this card. He is unbelievably quick on the ball and he can change directions easily inside the box. He is a great finisher - the best in my squad - and has 2 strong feet. If you're playing him at CAM, he works best for me with a strong striker/s up front who can hold up the ball and let butragueno run through. As you'd expect, he is not great when shoulder to shoulder with a defender and will get pushed off the ball easily, but his high balance keeps him upright to immediately press the defence if he loses the ball. He also does lose stamina quite quickly for me, but he can normally play 90 minutes without problems.

One of the best attackers in the game.

Stays on his feet

I got Butragueno out of a Mid-Icon pack in February, and he has been nothing short of fantastic. When I got him, he became easily the best player in my team and is currently the top goal scorer in my club. Even when TOTS came around, he still managed to bench my TOTS Vardy, FUT Birthday Griezmann, and more. I play him more at CAM now because I have Benzema or Vardy TOTS, and he is probably better at the Central CAM position in the 4-2-3-1 formation. I use a hawk on him now, especially for physicality, but he really doesn’t need the pace or shooting boost, but now due to the TOTS and all these other fast cards, I recommend you boost his pace and physical in some way.