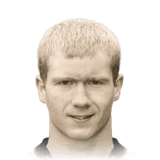 Zinedine Zidane was once asked in an interview, “What does it feel like to be the best player in the world?” The Frenchman replied, “I don’t know, ask Paul Scholes”

That's maybe too much for FIFA, but in real life was not so far from the truth. I was able to buy this player on the market during a little crash bidding him for a reasonable price and I place him as right median in a 4 4 2 lineup and give him instructions to stay back, cover the sides and get normal interceptions. Two main reasons: first, I paired him with an box to box midfielder that provides the necessary runs to get in the space (I need a defensive player) and second I want to limit the high attacking workrate to balance my defensive phase.

I'll try to describe the attitudes of this player, but consider that the title of the review fit perfetcly for the feelings I got on this player. In 15 games he got 4 goals and 5 assists, so the numbers are not so impressive BUT... I have to consider the presence on the field to give an idea of how important is his contribution. And considering this I can say that is suprisingly good as playmaker, but also he can do something unexpected regarding the defensive tasks. His interceptions are very effective, and maybe due his high aggression he can win the ball despite his low strenght/standing tackles attributes. Tha pace boost given by the Hunter chem is more than enough for his role, and I'm not sure to change it because I'm pretty satisfied about this and I'm scared to change it (it will cost 5k by the way if I choose wrong and he gets worst).

Well, how can I describe the job of Scholes? In the middle of 2000 AC Milan got two totems in front of the defensive lines, answering the names of Pirlo and Gattuso; this duo can be compared to a miner (Gattuso) that does the dirt job digging to find raw gold and a goldsmith (Pirlo) that turns the ore into a jewel with his creative skills.

Scholes makes both: after getting the ball he can use his insane passing skills to start the counter. If you got someone that can finalize, you can just give him the keys of the midfield and counting the scoring chances. So few assists, few goals, but LOTS of key passes.

Only disappointment is regarding the shooting: I expect something more, but he rarely comes near the attacking third so is not so important (such a shame, he was deadly in real life).

This review will help you to do not disinstall FIFA after getting Scholes in the Mid Icon pack, reconsidering to use him in your team.

Oh, if you're Man United supporters buy him, you will not regret... wait, true fans ALREADY got him in the team!

PS I'm not a Red Devils supporter, but I grove up with legendary teams accross '90 and 2000

Immense contribution on the pitch

maybe shooting, but he's not a striker so is not so important