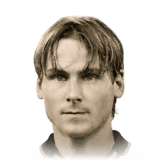 It only took one game.. better stats than the baby Dalglish but with god tier passing which makes a huge difference. Played him as a left striker and he just scored everything. So far the best player I've used in the game.

Just to get an idea of how highly I rate this card, I have his base card untradeable yet I'm still using 1m of my coins to keep this version... He's basically a smoother, but slightly less defensive 90 Gullit for a fraction of the price. Don't waste this guy out on the wing, play him as an offensive "get forward" CM, CAM or even ST and put a Sniper on him.

I play him as a get forward, cover center and conservative interceptions LCM (conservative just for the reduced stamina loss). In this set up he always seems to pop up at the perfect time in and around the box, and with his 5* WF I'm always confident he can blast them in. He feels great on the ball yet he also has a nice stock in game which means he isn't easily pushed around. Even with his average defensive stats and being on "get forward", he contributes a lot in defense. It's not that rare for him to end up with more tackles won than my other defensive minded CM's. His defensive stats are just about high enough that his defensive Jockeying feels fairly smooth. And of course his passing is top tier.

So he's basically the perfect player for what I want in my set up. Only thing you could ask for would be higher defensive stats, but then he'd literally be better than Gullit and cost almost 10x the amount. If you need an offensive CM or a rounded CAM, Nedved is your man. He's the cheap Gullit.

No stand out cons

I packed him from untradeable pack (don't remeber which kind of) and he is first icon I've packed during my FIFA FUT career.

In the last fifa Nedved was not so great so I had some doubts about this Left Winger beast.

During the few first matches he showed his worth and in a few months since he is still the best player in my squad.

He starts as LM but as I change tactics he moves to dominate the midfield as CAM or sometimes I like to play him as ST.

I like to play him as hunter because sometimes when there is poor connection, I feel the pace matters the most.

In 320 games played he has scored 280 times, and I can tell you when I did season challenges like icon swaps, I did quit games at the very beginning a lot.

Dribbling: He is amazing dribbler, you sometimes may push trough enemy players by accident because he just gets the ball back. He is very agile and with the ball i would say, unstoppable.

Shooting: Shooting is on point. Doesn't matter which foot you shoot or pass, the result is same. FInesse shots are crazy and power shots are exellent too. Finishing world class you cannot miss the goal with this guy!

Skills and positioning: With 4* skills and 5* WF he is also able to play in the wings. You sometimes may push trough enemy players by accident because he just gets the ball back. In the forward positions it feels like he is always in playable position.

Stamina: He can run all the way to the penalties if you start with full stamina.

As I said earlier, he is still the best player on my squad, even tough my squad has many beasts and I've tried so many.

I very highly recommend this great legend if you can afford it. The price is on point imo. There is absolutely nothing bad to say to player in his role.

Funny thing is that FIFA doesn't mention a word his significant career in Juventus, but im pretty sure it is because they are not authorized to use Juventus logo or other stuff.

Sometimes I feel ugly and I don't have many friends

I've tried a lot of icons and great players as a CAM in my 4-2-3-1 formation (Neymar, Hagi, KDB,...), but no one equals this man. Nedved is a REAL THREAT. This is my first review on futbin but I had to review this guy he's just insane and everybody should try him if they can ! He has the 'ICON' trait idk how to explain it but he's dominant in my team and outshines every players who used to play as CAM for me.

Pace : I play him with hunter (I bought him with hunter on him already), he's so quick. He can pass trought the defense very easy with a good long pass. He beat defenders like Varane, Diego Carlos almost everytime. He's pretty solid with 75 strenght and 82 balance, he can resist easily and pass the defenders.

Shoot : His main quality. His shooting is just INSANE ! The 5* WF makes him unstoppable in front of the goal. He can score finesse shots, powerful strikes, shot at the near post,...I already played 10 games with him in rivals, 3rd Div. I've faced great teams with players like CR7, Messi,...But he has more impact on the game than everyone of them. I scored 13 goals and assists 6.

Passing & Dribbling : Again, the 5* WF makes him a real playmaker in the midfield as he can create some space with his vision. He's so dominant also because he's very agile and he's very confident with the ball even if your team is struggling with the opponent's pressure. I always find a way to beat the opponent's lines with him he's so crucial for me.

Physical & Defending : He's pretty solid as I said before the 75 strenght and 82 balance makes him difficult to move in 1v1 with fullbacks and some great CB's too ! I also like his 80 agression because he can catch the ball very high on the pitch and you can counter the "Park the Bus Meta' with that kind of interceptions. The 91 stamina is also a great quality as he can last a full match and still being very accurate and dangerous.

I was looking for a new CAM/ SA/ ST for my WL squad. I have always wanted this guy in my squad, and can finally say that I am a proud owner of this legend!

I have tried Messi, Overmars, Neymar, Aguero Scream, CR7, King Kenny, Best, Mbappe, Son.. and can say that this guy is by far my favorite player this year! He is just on another level.

This boy can run! The combination between his fluid dribling combined with his strength is making this guy unstoppable. When this guy gets his feets going, no one can stop him. He feels like R9 back in the good old days.

This guy have to be one of the best finishers in the game. He is finishing everything for me this year! Long shots, finesse shot, left foot, right foot you name it.

Do I need to say more?

Crossing, long balls, short passes. This guy will deliver them passes like DHL on speed with both of his feets.

Position: 10/10 - Is always in a good position to make your gameplay more fluid and to score good bangers!

Strength: 10/10 - Wow! Speed, agility and strength. This guy is the new Meta. Its nice to have a central player that is not getting bullied of the ball.

PRICE: How is this guy even under 1 000 000? This Nedved card is a bargain, will for sure go up in some weeks. People are really sleeping on him.

Bargain at this moment!

I cant really find any bad things to say about my Pavel Nedved, he is just a all round BEAST!

So on Saturday i was doing my Victor Osimhen objectives and ended up getting the 50k pack for achieving it in div 3. I jumped off the animation cause usually nothing pops out of packs so i don't want to lose time getting disapointed. To my surprise this little man was sitting inside of it. I tried him last year adn liked him a lot but this year i wasn't so certain about him, oh my god i was wrong... I use him as a CAM in a 41212(2) and he performs astonishingly well. He is fast enough to get from half the field to the goal, he always carry the ball stick to his feet and has the option to both assist the strikers or finish himself. Passing as you can see on the stats is very very precise and realiable. Shooting is for me one of the major surprises on this card because i've tried the likes of De Bruyne (even TOTY), Reus, Neymar... And he has the most consistent finesse shot i've never used. I'm not gonna say that he scores all of his chances but at least every shot you make is going on target or very near. Finally the thing that i loved the most about this card is that his strength makes him a threat when opponent is trying to start the play by passing on the back. Nedved steals the ball very frequently neaar the area and then you can choose to both shoot or pass and know that you are very likely to create a good chance.

Pace (more than enough for a CAM)

Passing (both short and long)

Nothing at the moment

But the 86 version feels better in game.

The 5 star wk is what we want

stamina the guy as 3 langs

shooting is nasty from any angles

man for the price you buy hazard and he l do the same job... you know what i mean

The card is good for sentimental value