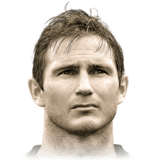 Lampard is a great as a cm in a good team he is not the player to come in and single handily win you games, I tried paying him at CAM but his pace and dribbling was no up to par and he more suited as an attacking cm where he can use his passing and long shots abilities

Pace. 6/10 obviously his pace isn't anything good but is useable if used right as a cm.

Dribbling. 7/10 I was disappointed with his dribbling he to clunky with the ball and lack the agility which is important for any player but his composer and reaction are great which makes more of a player who runs behind playes a one-two and shoot

Shooting. 9.5/10 Fantastic shooting he finishes everything inside and outside the box, the only thing preventing 10/10 rating is his positing he sometimes not often is behind the attacking line and not going for runs

Physicality.6 /10 Nothing special not the strongest but holds his own, his stamina is decent but if you him the same way i did as a box to box he wont go to extra time