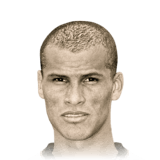 This Brazilian legend is insane in fifa 20. I packed him from the baby icon pack and was at first disappointed that it wasn't ronaldinho but when I put him into his first fut champs game he sparkled, he scored a hat trick and assisted two more. I was playing him at cam in the 41212 with gnabry potm and politano objective ahead of him and he outshone both of them easily. His shooting is like nothing i have ever used on this game, his left foot is an absolute rocket and he scores nearly every finesse shot and near post shot. His passing is amazing and can make defence splitting balls at ease. His dribbling is also very good and can perform tight circles very easily and has an amazing drag back. I used him with a hunter which boosted his shooting but i used him with an engine for the first five games and his shooting was still out of this world. With the hunter it adds some extra pace but he does not feel express. He has enough pace to pull away from any defender due to his great first touches but sometimes faster defenders like joe gomez and eder militao will catch him up after a couple of seconds of sprinting. All of his 24 games were in fut champs and he helped me finish 20-4, my best finish yet and i might try and push on for elite later. The best player I have used on this game, and his 2* wf is easy to avoid and isn't that bad when i have used it but always push it onto his left. Also he is very strong on the ball and rarely gets pushed off it.

Pace 9.5/10: After doing the SBC to get him I really Didn't think that he would be this fast! Admittedly I did use a Hunter chemistry style on him but still. His ability to get away from any defender is so usefull and helps me score most of his goals. Using a quick scoop turn and then taking a heavy touch will almost always result in Rivaldo through on goal.

Shooting 7/10: His shooting is really dissapointing. The amount of times where he has put the ball just over the bar or just wide of the post is insane and it's driving me insane. At the same time his shot power is insane and he will sometimes score from really hard positions. He will almost never put it straight at the keeper which is good, either you score or you get a corner most of the time. Also you can't talk about shooting without mentioning his 2* week foot. So far I have avoided using his right foot much but the few times ive been forced to it hasn't been THAT bad. Comparing to someone like Bertrand Traore where every shot goes wide, rivaldo can actually score because of his shot power.

Passing 10/10: His passing had the opposite effect of the shooting, I didn't expect much but WOW. His card is the best passer I have used in this game and it really helps. I think his 26 assists shows this pretty well. Through balls, long passes, short passes and especially low driven crosses are so good. He really is the chance creator in my team at the moment.

Dribbling 7,5/10: Considering his actual card stats I guess you could say his dribbling was disappointing. I dont't feel too confident when taking people on and the Agility of Rivaldo is not that great. This really isn't that needed tho as you could easliy take defendersout with just raw power (pace and streangth). His dribbling still isn't bad tho, it's just not great.

Defending 3/10: As a striker he obviously doesn't do much defending, but when needed he can put in a decent performance.

Physical 8/10: His physical is pretty good, he can shrug off most defenders and jump high. He has good stamina and he feels strong when on the ball. Much better streangth than the card says.

Can shrug defenders off

Not as good at finishing as you would think