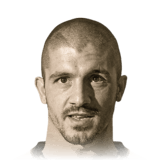 The player has the same feeling as kante, a lil less agility but much more power once he is on the opponent. Decent passing, short pass are 90% on the target , trough balls 70% id depends also on the difficulty, when the defenders are tight i would not risk a through ball with him. Defending he amazing once he is on the opponent, both standing and normal tackles are superb but the small size doesn t allow him to open the leg and intercept many passes. Combined with a tall cdm which 'open the legs"is super, alone i would go for someone like fabinho or Petit. For 500k is a bargain i would rather take him above Kante as for 180k more you get Gattuso which is better and more linkeable. Also baby gattuso is CM 85 rated but he is actually the prime version of the card 90 Cdm rated.