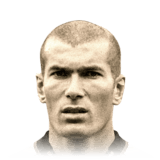 Zidane is a god! Helped me get from a Gold 1 - Gold 2 player into consistent Elite 2 and 3. Put an engine on him and you cant take the ball off him. Played in a 41212(2) at LCM and he would bring the ball from the defence and dribble it up all the way to give to the ST on a plate. Unreal at passing from little 1-2 balls in the middle to switching up play. Can't stop him from shooting anywhere, finesse or ping it top bins he's incredible.

Packed this guy FO a while back and tried to use him in all sorts of roles as I wanted to keep him all year. I would say he is probably more suited to Box to Box than a CAM. I used him there originally as the central CAM in a 4-2-3-1 narrow with an engine and his passing is mental but he is a touch too clunky for that position, you can get by but there are better options. Then switched to a 4-4-2 with him and a workhorse next to him (Goretzka RTTF, Scream Firmino, Kante etc) and he felt abit better. Nice and strong with godly passing and underrated defensively, he did however get tired quicker than the guy next to him every time.

Overall he is a great card, a touch on the heavy side but makes up for it, HOWEVER nowhere near 2.5mil coins worth of player. If you buy him at this price then good luck to you, much better cost effective options.