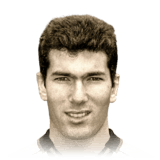 To be frank, this year I loved Pogba and he is way better than last year (maybe undeserved but it’s not my business and its just a game…) but only in online seasons while in weekend league, he didn’t meet my expectations and I decided to try Zidane for his pace and other iconic abilities :) who is similar to Pogba due his height and body type with skills of course.

Despite being a baby icon, he is even better than baby

to sell him in the short term.

He is agile, fast and everywhere. Shooting is perfect and even DDG cant save her shots and you don’t need timed shooting with him. Behind Mbappe and Neymar, he is so strong and leading the gameplay by also coming deep to take the ball even if I instructed to stay forward which is nice cause he is strong and his long passing is also great in game. I believe that he will be more expensive since 2.5 mio is nothing for such a card while Eusebio and others are around 3 mio and more.

Headers are below expectations but the game is broken in that sense so its not an actual con.

Played 250 games with him at CAM, ST, CM, and he's brilliant at all three. I've also put hunter, engine and hawk Chem styles on him and here is what I've found. At CDM you want an engine on him, because pace is not as necessary when playing the deeper roles. Being a bigger player he is not as shifty/agile at Kante, or IF Torreira, but has better ability to spring your counter attack with skills, and passing ability. His attacking qualities are very much wasted here. At striker the lack of elite agility and balance let him down against elite defenders. I found him running into the defender often because he needs more room than Griezmann or Messi to go through the animations. However if you play with him like a Vardy, and he's out pacing everyone in the back or using his high strength to gain the advantage. He's best running at players from CAM/CM with the hunter chem style. He has more space to pick out a pass, and dribble, and tends to make the late run into the box opposite the ball. I would recommend him if you have the coins to play with, but I would not be trading in RTTF cards to get him as his price is probably at it's ceiling.

Shooting, positioning, dribbling, passing and speed. He Also is a good defender.

Stamina, but with 88 and in a CM position it is normal, since he Runs a lot in the spaces