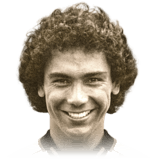 Hey friends, hopefully you are all doing well in this horrible time of corona virus, please be careful, stay at home and most importantly wash you hands people. With being said lets now get into this review:)

I got Hugo Sanchez from my prime icon pack off icon swaps, and at first glance i was like, meeh, it is alright you know, and since it is a prime icon i decided to try him out, giving him 20 games in the WL together with some games in div 2 as well. Lets just say i was very impressed, seeing his 60 composure might turn off a lot of people, which is understandable, because i did that at first as well. Lets just be straight forward here, his composure is NOT noticeable, at all, he was banging them in right left and center, and i was truly shocked, as i did not think a 60 composure player would play this well. And that is what most people probably wonder about him, if you can notice his composure, but for me again, i did not notice it any bit. Wanted to put this here as i feel like it is the most important to know about this card.

Now lets get into some of the pros and cons with this card.

Long story short, i would highly recommend trying him out. Have a nice day everyone, and stay safe and remember to wash your hands:)

Pace - Having 92 pace you expect him to be fast, and he is, with good balance between acceleration and sprint speed he feels very fast, and with his small body frame he feels faster than 92 imo.

Shooting - A key part of every strikers game, and some would say the most important. Having 94 finishing with 93 shot power he scores almost every shot he takes near or inside the box, with 89 longshots he can score from outside the box as well. His positioning is only 89 i say, but dont feel anything bad about his positioning at all.

Dribbling - Also a key part of an attacker in this years meta. He has got very good balance and agility which makes him very light on the ball and easy to control, good ball control and dribbling as well, which makes the left stick dribbling and drag backs with this card very affective.

Passing - Surprisingly good, very good vision for a striker and good short passing, only negative could be the long passing, but for a striker, not really a major problem.

Physical - Feels relatively strong, mostly because of his balance i think, he will get bullied off the ball by van dijks etc. but 74 strength for a striker like him is acceptable.

Weak Foot - Even though it says 4* it feels like a 5*. it may be because he was actually right footed in real life, so the card might just be glitched :D

Stamina - being 79 he could get tired if you go into extra time.

Skills - only 3*, which for some people is worse than for me, really dont know how to skill, so really not an con to me, but for other people it could.

Everybody rejected him because of that 60 composure...

I decided to try him and see his real value. Apart of that, he still having 92 speed, 93 shooting, 90 dribbling and 81 passing, for a striker that's very good!

Positionned alongside cavani futmas in a 4-4-2 he's incredible. Everything goes in! I don't regret anything and i think i'm gonna keep him until the end of the game.

Truly game changer for me he saved so many games

-Shooting (incredible, shot power, long shots, finishing, i don't even doubt when he's in front of the goal frame

So I got this guy in my Prime Icon pack. Wasn't disappointed, but wasn't ecstatic either. But, I obviously tried him out since other than maybe the SM and Composure this looked like a class card and that's just what it turned out to be. Like most people I thought he'd not be clinical with his 60 composure, boy was I wrong. I replaced him for CR7 in my squad and he immediately filled his shoes.

In 17 champs games this guy scored 25 goals and got 9 assists (note out of the 17 games I believe 5/6 were early RQs where he defo could've gotten more). He finished everything with his left foot and fits the meta way better than CR7 with his high agility+balance. There wasn't an instance where I felt that his composure cause him to not score. If I tried him without prior knowledge I genuinely would guess it to be around 90. Additionally, I felt his positioning to be up there with some of the best I've experienced, always knows which runs to make.

His passing is very solid for a ST as long as you keep it relatively short.

With a hawk his physicals are ok, sometimes he manages to keep the defender away but usually he loses the battle. His stamina is enough to last to the 60-70th minute, I've sometimes played him the full 90 without real issues. For what its worth in fifa 20, his heading is pretty decent.

His pace is great, with his high dribbling stats he feels a lot faster and comfortable outpaces CBs.

Overall, I feel this card is an absolute bargain. People sleep on him because of his composure and don't want to risk getting him, but I assure you it's not a decision you regret. For this price class easily the best Icon ST available.