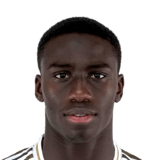 0
Red
Upcoming Matches
P. Chemistry
Squad chemistry
ST
74
RW
77
LW
77
CF
76
RF
76
LF
76
CAM
77
CM
77
RM
79
LM
79
CDM
77
CB
76
LB
79
LWB
79
RB
79
RWB
79
Reset
Basic
Sniper
Finisher
Deadeye
Marksman
Hawk
Artist
Architect
Powerhouse
Maestro
Engine
Sentinel
Guardian
Gladiator
Backbone
Anchor
Hunter
Catalyst
Shadow
Comments
Reviews
0
/600
Update my avatar Dos and don'ts
Top Rated
New
Controversial
Show comments
Top Reviews
Only logged in users can submit a review
A review must be written in English
At least 200 characters are required.
Compare this player to other similar players you have used(optional).
If you import your club to FUTBIN or send us an image with the player data(fill the form below) your review will be marked as verified.
Include what you liked about the player in the pros area and what you disliked about the player in the cons area.
Your review will be manually checked during the next 24 hours.
Chem Style Used
Formations
Position
Rate Player Base Stats (1-10)
Pace
5
Shooting
5
Passing
5
Dribbling
5
Defending
5
Physicality
5
Most Used In:
Submit Review

Ferland Mendy is one of a kind LB in Fifa 20 first and foremost because of his 5 WF. I really like the fact that he can tackle and pass with both feet and that's something that is not usual at all for any full backs. I've been using him with Anchor for over a month now and I have no intention of changing him with another LB. He is sitting next to Varane, Lenglet and Semedo and he's doing an amazing job at defense. He lacks some attacking skills in my opinion. Feels a bit stiff when it comes to dribbling and I do not like his crosses at all but the main reason he is staying in my team is the fact that he is fast and strong enough to stop any winger in the game.

I would definitely recommend him as a player that can stay in your team up until TOTY unless you have chosen Roberto Carlos from Icon Swaps.

I used to play with Alex Telles as LB, who was pretty much inconsistent and could be considered a weakspot in my team.

Then I decided to spend some coins on this beast. Used him with Backbone chem.

And yes, he's actually good. He doesnt need a pace boost to keep up with fast wingers, so u can focus chemistry on his def/pas skills. He's got decent physical presence, and he can push lil suckers off the ball pretty easily. Passing is probably his weakest point: he's prone to mistakes both in short passing and crossing.

Defending wise this guy is pretty average for his price: not as bad as Angelino, but on the same level as Telles.

Overall, I consider this card to be overhyped in the early stages of the game. He's good in game, dont take me wrong, but he won't be a gamechanger if you already have other top non-Icon LBs.