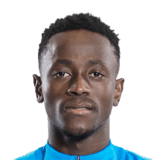 In FIFA 19, he was an ABSOLUTE BEAST on Hawk -- so I naturally gravitated towards putting a Hawk chem style on him after a couple of games (for comparison)(roughly 20).

It wasn't helpful, and he missed a lot of chances in front of goal -- easy chances... I was so disappointed and was more so every time I tried a new Chem Style -- nothing seemed to work.

I finally decided to try and really get the most out of him and not worry about the PACE (as it was already there) and focus more on shooting. Of course, I still wanted to increase the effectiveness of his headers (since he has 93 jumping) and felt he was a bit clunky this FIFA. Marksman seemed to fit what I wanted of him and upon trying it out on him, was immediately rewarded with my Boateng of FIFA 19.

I just clutched out a Gold 3 finish in WL thanks to Boateng -- honestly the MVP of the tournament. So this is what I found of him when playing him in WL:

-Can finish inside and outside the box (scored some BANGERS for me)(87 finishing, 83 shot power, 76 long shots, and 83 volleys)

-Can do well with Aggressive Interception tactics (great for counter attacks)

-Can be somewhat inconsistent with his shots (69 composure)

-Not a very skillful player (3* skills)

-Passing (not ideal for a False 9)