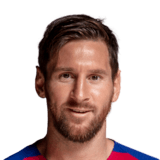 His real-life stats are currently 4 goals and 7 assists in 8 matches in domestic competition. He also received 0 yellow cards and 0 red cards.

Here i go again in fifa 20, this year im very happy that i can finally get this guy after so many rumor of his perfection dribbling.

I have played him in fifa 19 but then sold him to get back to cr7 because in fifa 19 heading is still very OP.

But since heading in fifa 20 is dead and the meta is more about dribbling and skills, i have sold all my decent players to get this GOAT.

I was considering about Neymar and him because i could save 400k if i get Neymar instead but since Mbappe requires a lots more coin and League 1 doesn't have many good players to link up so i give Messi a try. I take the risk with high chance of selling him to get Neymar if i feel he doesn't give what i hope for.

But the GOAT is so satisfied to control.

a. Use his left foot to finesse shot out side the box = Goal. You dont need to time finish, just get the right amout of power.

b. Use his right foot to near post = Goal.

c. With Messi you will focus on the dribbling, don't try to get to his left even its better, opponent will predict that. He can score will both feet so try to trick opponent. Remember L1 one way, exit the other.

a. He can pass perfectly, you will feel very confident with him holding the ball.

b. First when i got him, i was so excited that i dribbler too much and forget to pass, after losing goals i get to the way football played, pass. When opponent is focusing on messi dribbling then its the chance to have some though ball to your ST.

After having a hard time finding the CAM that suited my gameplay in trying the likes of neymar, nedved, etc, I went ahead and paid the heavy price for the player that I think is the best of all time in real life. And oh my god what a player he is, he has insane stats you can see this by yourself, but ingame... ingame it's a whole other story. He is excellent in everything you could ask for a CAM : shooting, passing, running, and especially dribbling. Plus, he has that special dribbling animation that only him has which makes him so good at driving the ball all the way to the back of the net combined with his INSANE shooting. I think he is the most fun card to play with out there !

Stamina but feels fine with the stay forward instruction

As TOTSSF has begun, and player prices have plummeted, i was able to pick up Messi for just 288K (XBOX). Having used him for around 30 games, it is clear to me that he is one of the best and most fun cards to use in the game. His dribbling style is unique to his cards and honestly made the game so much more fun to play, and his shooting and passing are near-perfect. One amazing trait of his card is the outside-foot shot trait, which allows him to shoot brilliantly from long range and score a huge amount of goals. Considering his extremely cheap price right now, i would absolutely recommend him to everyone looking for a game-changer. Finally, stay safe guys! <3

Pace, although this isnt an issue with a chemistry style to boost

I have nothing to say. He is just amazing. I use Messi as right striker on 4-2-2-2. He scores goals like nothing. The 174 goals in 71 rivals games proves it. His passing is too good. He can do anything. Dribbling feels amazing. You can go past anybody. Physical is OK, but not good. Id say he is worth the 1.4m.

-Best dribbling on the game

-Heading (Does not matter)

As I already written I packed Messi out of an untradeable gifted pack really early in FIFA 20.

On this stage of the game Messi was my gamechanger and he settled my squad to another level.

But with time flying and if I had a tradeable one, I would have sold him in January.

As this stage arrived, many better players in value of coins where on the market and the fullbacks where also getting better and better.

Now as we are coming to the end of this years FIFA, I would be really happy to transfer him into 300k.

I honestly mean, to compete on this level you can‘t tell that Messi is fun or even effective to play either out wide or as a single ST.

The only two positions imo where Messi is still playable are central CAM in a classic 4231 or a RS in a two-striker formation.

Since TOTS came out and I still can’t bring myself to bench him, he is my CAM besides Nedved 89 and Rodrigo Birthday (which I would highly recommend using as a winger if you have a better ST) and behind Butrageno middle at ST.

His passing is still exceptional, he is of course really agile and he is still able to score a screamer on good gameplay and if the script isn‘t against you. It‘s hard to score with his right foot, his outside foot shot shines up rarely for me. But anyway his shielding and holp up play is good enough.

So is he worth the coins at the this stage of the game for a CAM or second striker?

There are so many players (with the important 5 stars weak foot) who are actually better for 300k or cheaper at CAM like KdB, Neymar, Ben Yedder and so on...

Got him from a free untradeable mega pack at the beginning of this FIFA and he's amazing. Tried him at RW and CAM, he's definitely a better CAM due to his lack of pace. 480 games and 364 goals for me :)

So I'll start this review with a bit of context. Around November, I decided to quit FUT because this game is deplorable in every way, shape and form. However, a couple months later I logged on and opened an untradeable pack, and out comes Messi. Naturally, this was an excuse for me to get back into FUT. Messi was brilliant, averaging around 2 goals and an assist per game in his first 20, and got me back into FUT. However, with Title Update 12, something happened. My once great Messi now averages about 2 dribbles and 5 passes a game, and I've begun subbing him off for Dan James around the 60th minute. I can't actually remember the last time he contributed to a game and Dan James is years ahead. The once great dribbling now feels clunky due to servers and as a result, it is not viable to use Messi anymore. Save your coins and buy a much better player eg Mbappe, Ben Yedder.

Dribbling - When the servers aren't being disgusting, he can dribble

Shooting - If you get it on his left peg and a couple yards of space, it's over

Strength - gets bodied by the wind

Passing - never picks out the right one

Stamina - spent by the 60th minute

Better options available for the price

Messi is just the best dribbler in the game. Messi does not feel that fast and i need to get used to the fifa 20 finishing with Messi. his finesse shots are great like Arjen Robben stile, Cutting in form the right and finess far post. but like you expect he can win headers agaings weak defenders/midfielders. Not scored a free kick yet.

Not worth 1.1 Mil against quad battles. online he certainly is of gr8 value.

Please comment what chem style i need to put on him. I got no clue.

I also made a review on him last year: https://www.futbin.com/19/review/6219/Lionel%20Messi/player