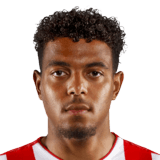 For roughly 55k, this card is an absolute steal. He is also easy to fit into fairly decent teams with the likes of OTW Promes, IF De Jong and IF Bergwijn being released lately. I have used the likes of Rashford, Jesus, Lucas and Mertens already and Malen far outperforms all of these players. His pace, shooting and dribbling are all incredible, his physical is better than most strikers and whilst his passing isnt the best, he still gets many assists.

His pace and dribbling is exceptional, the new dribbling mechanics are especially effective with him. His shooting is also very reliable - he may miss the occasional shot but 9 times out of 10 he will find the back of the net. His physical is suprisingly good, he has scored a few headers despite them being seemingly impossible to score on this fifa.

He can struggle up front on his own. Someone like Bergwijn at CAM to provide combinations and feed off of him makes him play a world better. His passing isn't the best however the positions he usually pops up in do not require him to complete many difficult passes.

Since I'm Dutch, I wanted to start FIFA 20 with an Eredivisie squad. I had some concepts in mind and Donyell Malen was the only usable option, but he turned out to be so much more.

Donyell Malen certainly hasn't disappointed me. In fact, he is actually astonishing. He's scored 24 goals in 10 games and is by far the best striker I have used in FIFA.

Once you send a through ball he is gone and no one will be able to catch up with him and he will put 9/10 balls in the back of the net. His dribbling is decent because I've boosted that with Marksman chemistry style. Passing is okay at best, but you don't need your striker to give assists; you want them to score. And that is exactly what Malen does. Here are the Pros and Cons about him: