COUTINHO - ONES TO WATCH FIFA 20 Prices and Rating 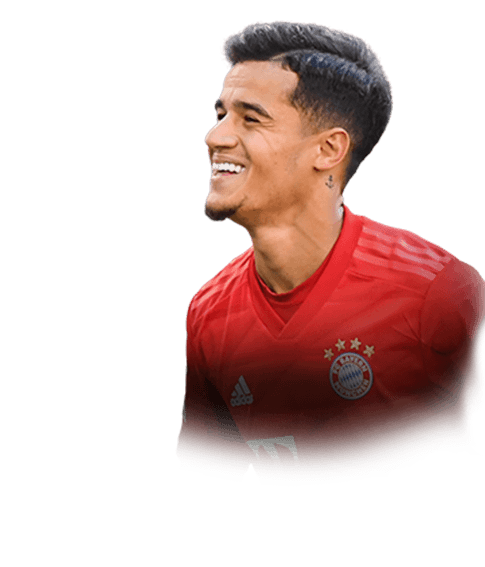 Coutinho's ONES TO WATCH card is rated 89, he is 172cm | 5'8" tall, right-footed Brazil winger (LW) that plays for FC Bayern München in Bundesliga with High/Med work rates. His average user review rating is 4.9 out of 5 . He has 4-star weak foot and 5-star skill moves, giving him the ability to perform every skill move in the game. He does have a real face in-game. Coutinho has 6 special cards with ratings between 86 and 92. He was born on 12-06-1992 and he is now 30 years old.

Ive tried most of the OTW cards. I ended up liking this one the most. Coutinhos touch is phenomenal with vision and passing equally as good. His shot is great as well, which makes him a threat anywhere around the box. He works well on the wing with solid passing, and cutting in for a shots, and if you want, makes an even better CAM if you need him their. (switch him in game) His nationality is perfect for linking, so he fits in many team comps. Oh. and 5 star skills <3

great touch and vision. Silky smooth gameplay that you only find in elite players. Probably getting a ton of IFs going by his current form. Has a rocket of a shot. 5 star skills!

not a physical specimen, but uses his dribbling skills to get by and around bigger players.

There is a lot to be said about Philippe Coutinho. I deploy him at LCM in a 4-3-3(2) with a hunter chemistry style. So far, he has racked up 25 goals and 11 assists in 55 games. Because of this output, and many other reasons, I have come to the conclusion that he is the quintessential midfielder for this iteration of FIFA.

Why Coutinho? Philippe Coutinho is a good choice for a Mezzala because he is a very skillful player and his price is cost effective, provided that you purchase him before he starts accumulating IF's. He is Brazilian with 5* skills, so he is much more ideal for skillers and easier to link to the Premier League than other Bundesliga CAM options such as Marco Reus. Coutinho has H/M work rates so he will pull his weight defensively. Movement, positioning and technical abilities are excellent and close to Elite 1 standards, and most importantly he is a clinical finisher from both inside and outside the box.

Philippe Coutinho, being the new poster boy of Bayern Munich, possesses the potential and ability to accumulate 3 or 4 more IF cards over the course of this season. And with his current price sitting at around 220k, his OTW card can be purchased risk free.

There is an early opportunity to turn big profits through Coutinho. Given his strong start at Bayern, including a solid return of 2 goals and 2 assists in 6 games, there is much reason to be excited for his future, and his OTW card's market value, so stay tuned.

I think this may end up as one of the best cards in the game this year, he already has one IF and playing for Bayern i would fancy him to get another few this year but even without any further upgrades he's insane. I have a mainly prem squad but Roussilion at LB and he links with my Lucas Moura at 9 chem. I swap them IG and play him CAM. His dribbling and first touch are exceptional with L1 dribbling he moves away and around players easily and he gets out of tight spaces, if you are confident twisting and turning under pressure he is amazing and when opponents try the 2nd man press he can get away and get a pass forward. His passing range is great and he has plenty of assists for me with through balls and little passes around the box. His shooting is exceptional as well the 4star WF and even without the finesse trait he is great at bending them in the top corner, i have hunter on him for the extra acceleration as i play a lot of one two's with him but deadeye would also be insane for this card. With people playing drop back his dribbling skills but also the danger from long shots means he causes lots of problems for people, he just smashed 7 goals in my last two games and i've barely played battles with him so his goals/assits are WL and rivals - going for around 200k at the moment so i'd get on that

I wanted to write this review before I shelled out all my cash into his TOTS! I have used this card since his 88 rated IF. He has been the single best player I have ever used on this FIFA!!!!! He is sooooo quick, agile and clinical! Over 200 games with this guy and he still incredible. I will be going into my final WL with this card and I am hoping that after that I will be able to afford his tots.

For people who don't have a huge budget I highly recommend this guy! He is so fun to use because of 5* skills! 50k for this guy (Xbox) is an absolute steal. Worth every penny!

Fast on the ball

Gets pushed off the ball a lot!