THORGAN HAZARD - ONES TO WATCH FIFA 20 Prices and Rating 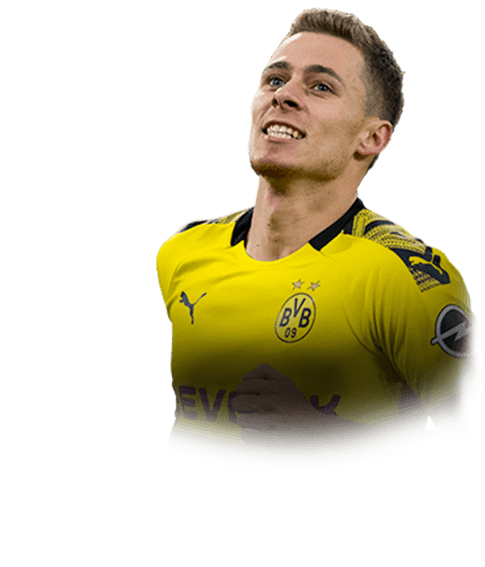 Thorgan Hazard's ONES TO WATCH card is rated 86, he is 175cm | 5'9" tall, right-footed Belgium midfielder (RM) that plays for Borussia Dortmund in Bundesliga with High/Med work rates. His average user review rating is 4.5 out of 5 . He has 4-star weak foot and 4-star skill moves, He does have a real face in-game. Thorgan Hazard has 4 special cards with ratings between 82 and 86. He was born on 29-03-1993 and he is now 29 years old.

I got this card from my free OTW pack for buying the game. I was a bit disappointed but I always gravitate towards the Bundesliga and Using hazards IF's last year he was fun. I played the 'base' hazard at middle cam in a 4-2-3-1 and he was good. He scored a decent amount. As times changed he now plays as a RM in the squad mentioned. He isn't as involved with the play as he was, but he is still a joy to use. What he lacks for in pace he makes up for with great dribbling and pinpoint passes! Who knows a couple more informs and maybe I can change him to boost speed more for an even better result. If it happens I will update this review.

Dribbling - The most interesting thing about this card is his dribbling. If you dribble without sprinting you can weave through players even when they are jockying which is very enjoyable. He has decent pace so you can accelerate away while they turn after so he works really well. Just don't expect 50 yard runs down the wing.

Pace - As I said don't expect to run in behind to chase a through ball, especially if a Mandy or Roberto Carlos is waiting. Bur short bursts this card has very decent pace at its 84 version. Especially with the small boost from engine.

Shooting - At middle cam the base card scored all kinds of goals, but neat finishes, he didn't have the power of some. he isn't perfect but he will score a decent number of goals. After the upgrade it seems he has more of a tendency to score with power and can still be neat. To be elite he needs a boost, until he is an 86 at least though you are better with the engine.

Defending - I like my RM and LM to help defend in a 4-4-2 sometimes. He does this job well enough, especially when his RB is Mbabu its fine!

Physical - Physically this card has no presence. Short, low stamina, low aggression he just simply isn't that player. He needs subbing in ET really but I tend to sub Reus and my 2 CM's, or sometimes Reus a CM and Hazard depending. If I had 4 subs though Hazard would go every time.

So maybe let's start from the beginning of the story. I've been looking for right-winger from Dortmund, basic Sancho wasn't good enough, I couldn't afford his UCL version so yesterday I decided to buy this guy.

In the first two games played with deadeye(i bought him with this style), he felt nice and confident on the ball, holding it close, that was the moment I knew that I want to play in FutChampions with him. But... he was slow but still playable. Then I decided to try something else. I bought hunter... first thought, well I've just lost 10k on a card. Well, I was wrong.

Right now his 99 acceleration and 91 sprint speed feel nice, he is winning a lot of runs with fullbacks like Marcelo, Robertson even Mendy. 4* WF feels like 5* in-box. I can't describe longshots, I've tried them once and the ball hit the bar. Passes? Not great, but still good enough to deliver the ball where u want to. Dribbling... Well, 96 agility speaks for me, ball held close to foot too. Physicality is the only con for me. 82 stamina isn't that bad but he needs to be subbed in 70 min, and definitely can't play 120 mins. He can't jump and be honest... even my 9yo brother would be able to push him away from the ball.

If I'd be forced to compare him to some other player-Lucas Moura Shapeshifters is my choice, Moura has a little bit better finishing and is fast without a hunter, but they felt so similar for me.