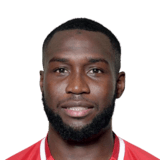 I don't know where to start, to praise this fella. Pacy,agile and cold as ice in front of the goal. I played him with Mbappe and Ben Yedder, and all of those tend to run circles around the defenders, and just score, and score, and score. This guy is really fast, and agile, but also got enough physicality to manhandle defenders. He also might only be 1.8 meters tall, but his 99 jumping makes him a real heading threat. Also his positioning and finishing are crazy as hell.

This man is absolutely insane. I play him in a 442 along with OTW Ben Yedder as the strikers. He finishes absolutely everything and feels incredibly fast in game. Dribbling is great with 99 agility, however sometimes his ball control lets him down. Definitely worth the money. I mainly play Div 4 Rivals and FUT Champs with him and his record is still unreal.

Very agile on the ball