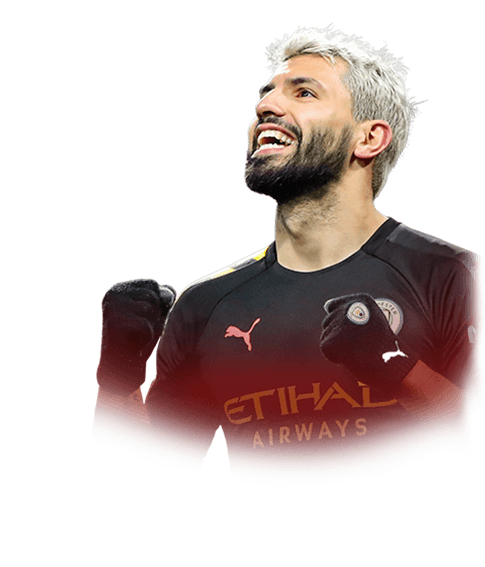 If you tuned in for the Headliners Traoré review you will know already that I was fortunate enough to get Record Breaker Sergio Agüero in my reward picks and that this review would be coming.  Additionally, you will already know that I played Agüero as the ST in a 4-2-3-1 for a grand total of 2 games before I had to change directions, playing Agüero as the central CAM for the remainder of the weekend.  While I do think Agüero would be the perfect partner in a two ST formation; he just didn’t have the pace up front to open up my opponent’s backline alone.  Even with the HUNTER chemistry style applied there just wasn’t the quickness I wanted to play with, but from a deeper lying position Agüero was able to be at pace as he approached my opponent's backline and speed was no longer a factor.  Agüero continued his record breaking form in the following squad: 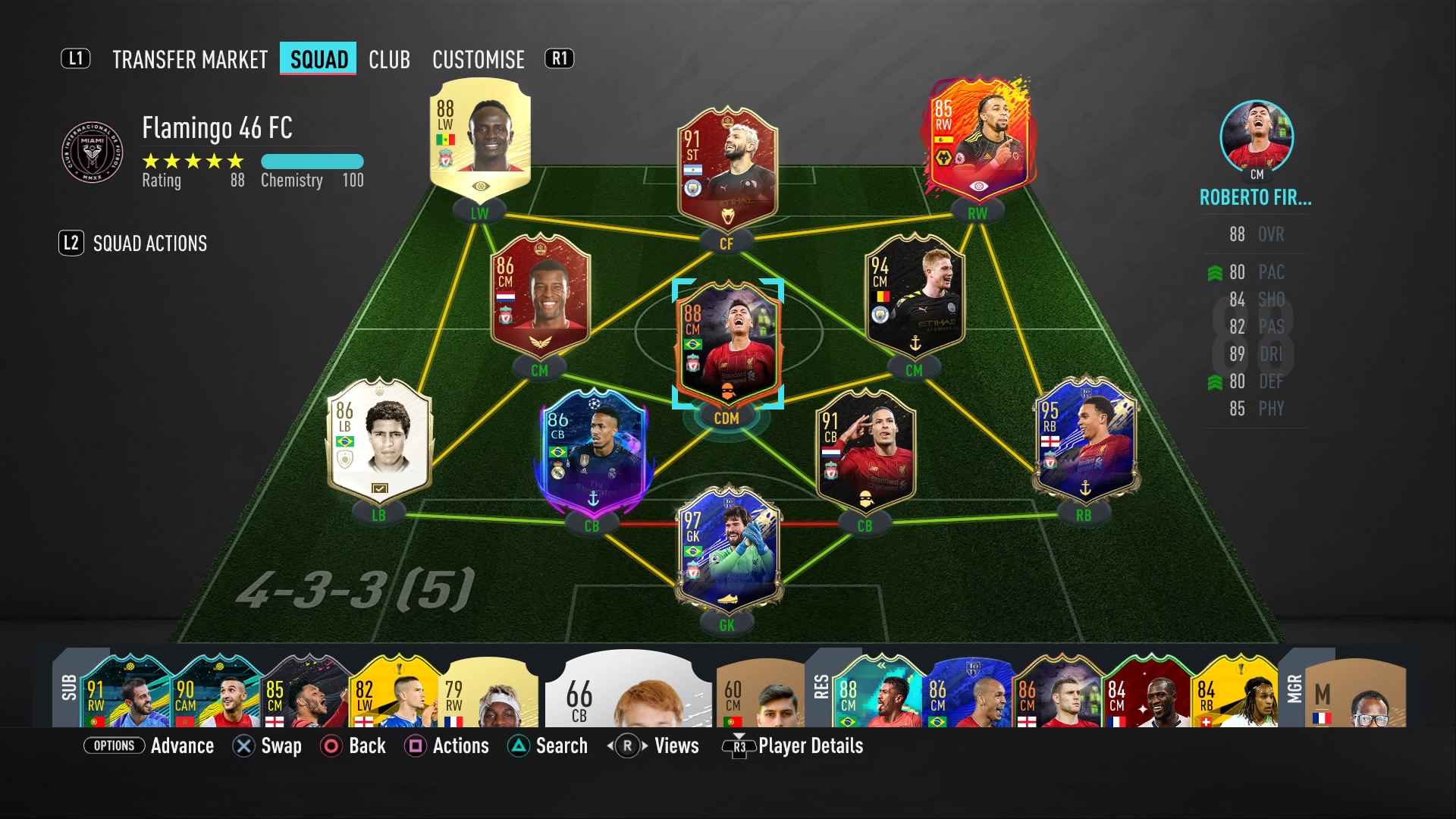 With 96 ACCELERATION & 91 SPRINT SPEED, Agüero is not a slug by any stretch; I still went with a 9/10 rating, but alongside Traoré it was evident that Agüero could use just that little bit more pace and is a huge factor in the price difference to Scream Agüero.  But while we are on the subject of Scream Agüero it is worth noting the comparison between their shooting of both cards; I’ll save you time, they are exactly the same in every category.  Both cards are incredibly clinical and most opportunities on goal, on either foot, end up in the back of the net.  Clinical is just the beginning of the explanation for Agüero’s shooting as a mixture of a 4 STAR WEAK FOOT and 99 in every shooting category, except for 85 LONG SHOTS, translates into a ruthless finisher.

Quite a few options to get Agüero into your squads: a growing list of Manchester City players, the obvious EPL collection, Argentinian options in different leagues (Dybala, Di Maria – if you completed the Moments card, and of course the GOAT himself), and finally a nice selection of Argentine ICONs.
While the pace was a small issue pulling away from defenders, maneuvering past them was not an issue at all.  I can see why ENGINE is a popular choice with this card given how the dribbling statistics look after, but without any boost at all this card was still responsive, agile, and can cause a lot of issues on the turn.  I won’t lie, 86 AGILITY did seem a little low (which shows the level of cards we are getting now when that seems low), but I am happy to report it does not have any effect on Agüero’s performance.

I have noticed this card fluctuates considerably throughout the day, but 590k seems to be a price I see Agüero settle at quite often.  If we look at Scream Agüero at over twice the price it begs the question, why?  While the shooting statistics are a perfect match, RB Agüero has superior passing and dribbling statistics, while Scream Agüero boasts superior pace and physical statistics.  With only 10 in-game statistics difference overall it does show the value the community places on that extra pace and I won’t lie it does make a big difference in the positions both cards can play.  All in all, I think the price is perfectly fair and then, of course, you have the fantastic card design, which has to be worth 100k itself.  I didn’t want to complain given the fact I have received an immense card through luck, but not having the card design is a bit of letdown.

Nothing much to say here as I have covered everything.  A small comment on the physical nature of Agüero, he has enough strength to get by on the ball, with 77 STRENGTH he was able to cope with the physicality in the center of the pitch.  82 STAMINA was not enough to get through the entire match unless you are using him as a ST, which is not my personal recommendation, but we all have different play styles.

Just for card design alone, I think everyone should be 100% getting this guy in their squads.  But all kidding aside you have to look at the review and decide for yourself.  22 goals and 11 assists from the CAM position (2 poor games at ST of course) was a nice return, yet the best part is that he felt like he finished every chance he had.  Of course, that is not entirely true, but I do not remember any clear cut chances going astray.  He defines reliability, and that was one of my favorite attributes in the end.  My final recommendation is that Agüero just falls short of his price tag as a ST and if you are in the market for someone to lead the line alone, he is probably not it.  Of course, this is all based on his pace, and if you are okay with a slower option that is incredibly clinical, Agüero again becomes good value for coins.  Finally, as a CAM is where I felt Agüero really thrived for me and he gets my seal of approval as a playmaker who can chip in with a nice goal return as well… Seriously though, look at that card design. Cheers for reading. 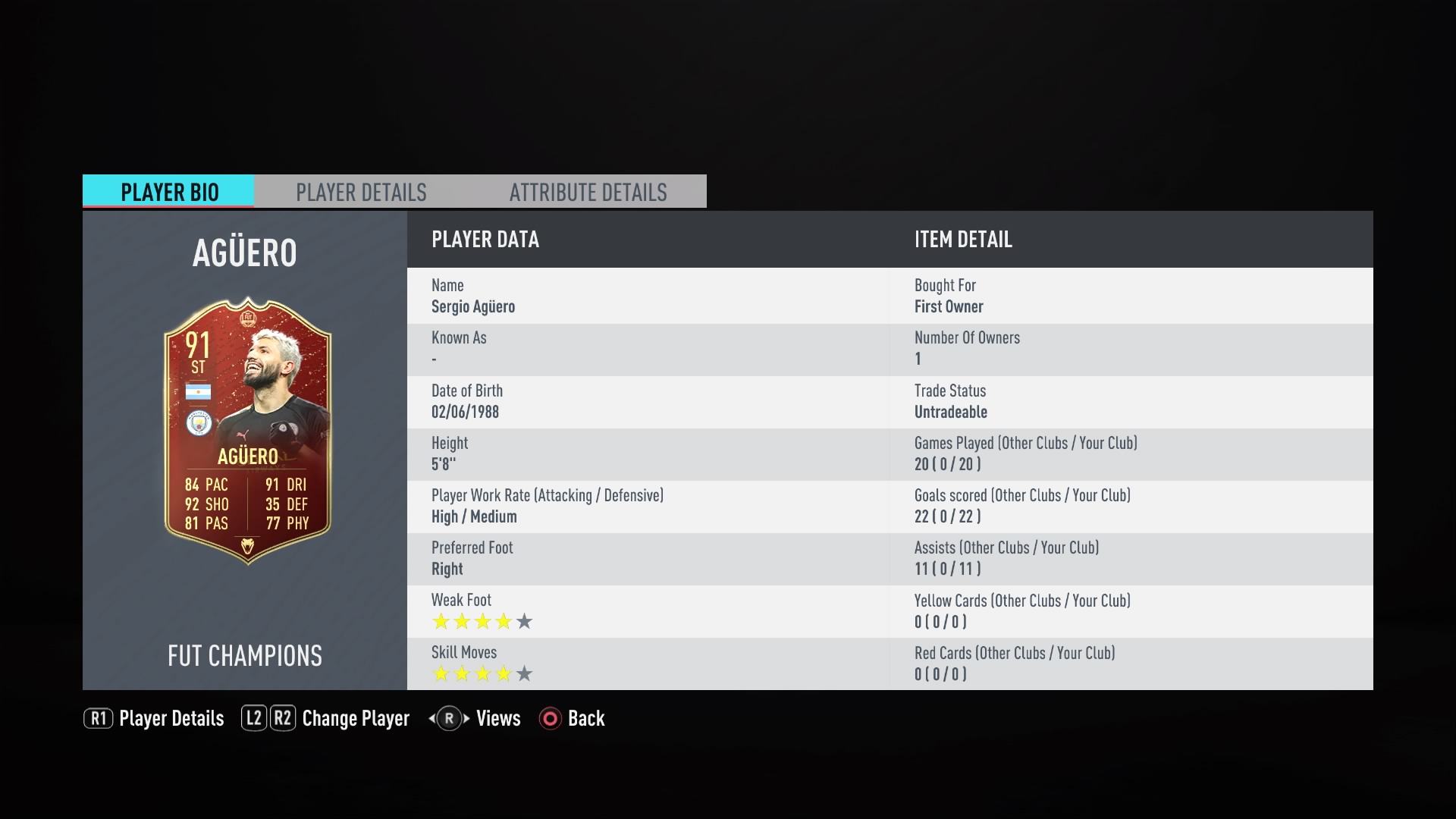 This Card is something... In 7 games of Div Rivals/ Fut he's scored 14 goals and assisted 4 times. In comparison to his IF its a pretty significant upgrade although on paper it doesnt seem like too much. The extra pace does enough that its noticeable although he still still doesnt have that agile feel of players like Gabi Jesus' IF. The guy buries everything, yes 580k is a lot but at the same time, when you get a return rate like that one its hard to say it's not worth it.

Scores finesse shots even though he doesn't have the trait