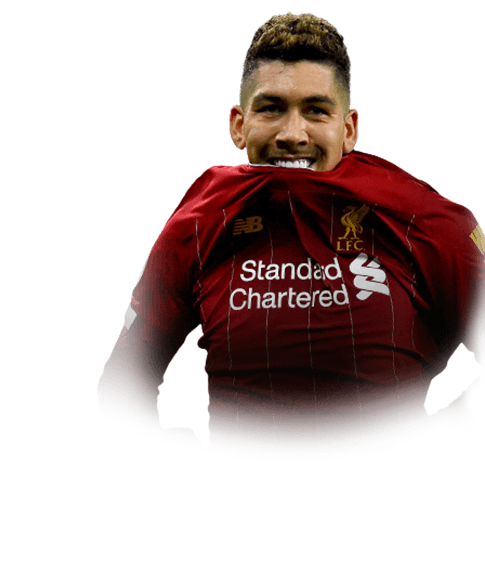 While TOTW 22 just dropped like a hurricane; TOTW 21 came in like a light rain.  The only avenue worth following in the end was the road to Bobby Firmino who received an 88 rated inform for his three assist performance against Southampton this past weekend.  If you have followed my reviews since the start of FIFA 20 you might have noticed the presence of 88 SCREAM Firmino in my squads since the promo dropped in late October.  However, along with the upgrade to a 5 STAR SKILLS came an increase in price that was just too good to resist and I reluctantly sold him before last weekend.  Enter 88 IF Firmino; an opportunity to bring back a player who has often performed for me, at huge savings, but of course the lack of defensive capabilities.  I applied the HUNTER chemistry style for the added pace and placed Bobby in the CAM position of the 4-2-3-1 (image of the squad is in-game, not how I started), and started up another WL journey, in which Firmino would be the guide in the following squad: 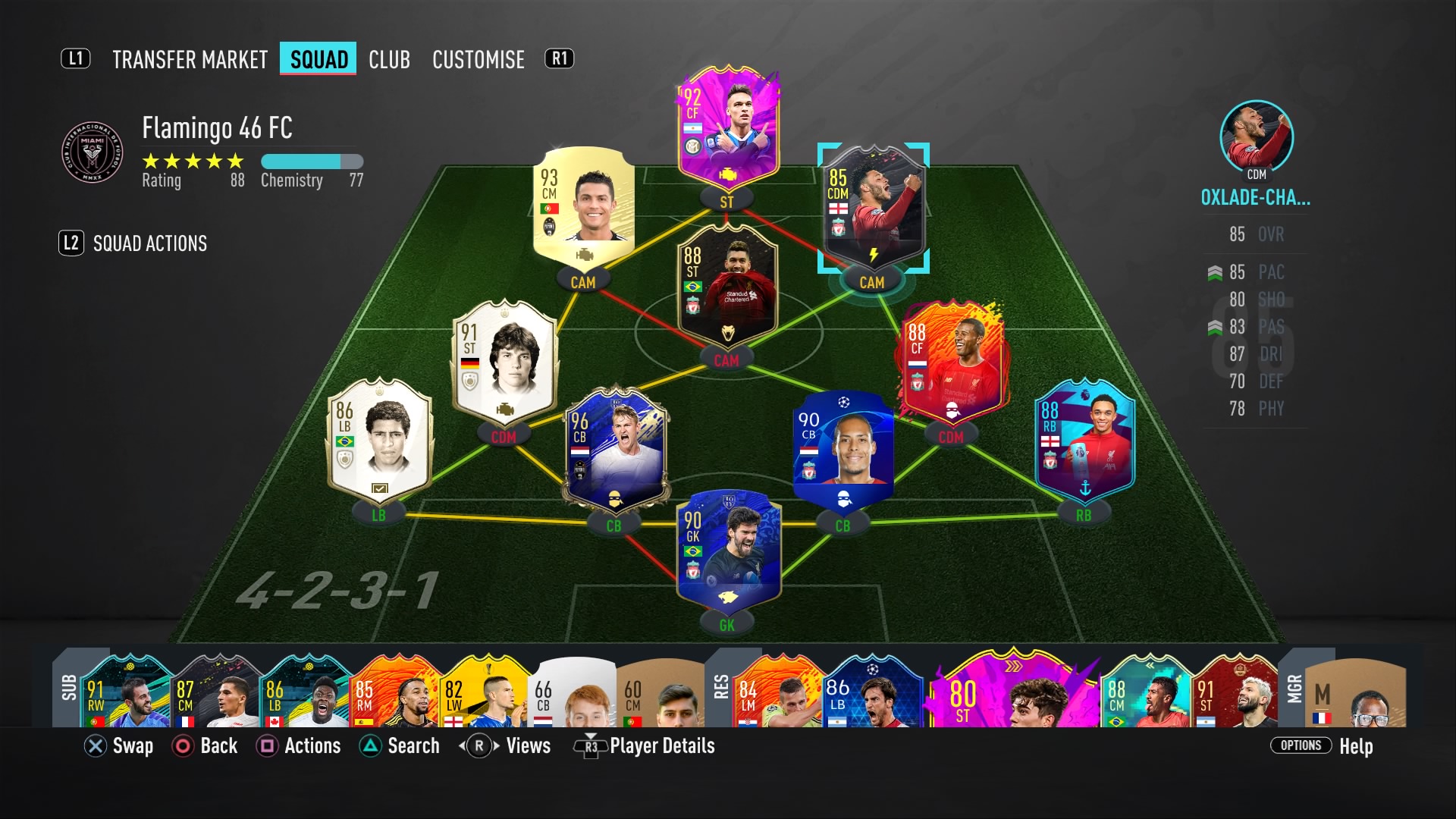 21 goals, 21 assists in 20 games.  I still cannot truly believe the impact a 355k card had on my squad this past weekend.  As per popular request, I have shortened all of my video clips to minimal build-up, with zero celebrations, and I still ended up with 4 minutes of Firmino footage from the weekend.  The biggest asset is the dribbling bar none… but I don’t know why? Sure 5 STAR SKILLS has been a nice addition to this card, but 82 AGILITY & 83 BALANCE are not what I would call incredible.  Yet, this card turns on a swivel, with tight control, and the dribbling when just using the sticks is phenomenal.  I should have expected it though as it was the same experience with the SCREAM card, but I just assumed there must be some hidden stats.  So first you dance around opponents, and then you pick a pass and he hits it there, or you take a shot and the 93 FINISHING and 4 STAR WEAK FOOT does the rest.  The result is one of the best returns a player has had for me in 3 years of reviews.

This has to be one of the easiest combinations to link to quality players in all of FUT.  EPL, Brazilian, Liverpool, central position.  Granted, I do normally carry a fair few LFC players, but regardless there is a large variety of options available if you decide to bring Firmino into your squad and should not be an issue.
While the goals and assists speak for themselves, the statistics are also interesting.  The application of HUNTER brings Firmino to 90 rated in Pace, Shooting, and Dribbling (his base stat); a lethal combination and perfect in the CAM position.  I was nervous that Firmino had only 84 Passing as his base stat and was worried it would be his downfall.  However, upon further inspection, the key for Firmino was both his 90 VISION and 90 SHORT PASSING, and it is the 68 FREE KICK ACCURACY bringing his total down significantly.  Firmino was able to pick out the correct passes and more often than not they found their target and kick started forward movement in the squad.

I do not want to draw connections between the price of SCREAM and IF Firmino as you are essentially getting a completely different card.  SCREAM Firmino is one of the best CMs I have used in the game and the defensive boosts he received are the perfect mix with his remaining traits.  While the SCREAM version can play as a CAM or ST, his defensive prowess is wasted in the front lines.  However, it was actually nice with IF Firmino as I knew exactly where he should fit in with the squad.  In the end, I feel like Firmino would be fair value even at 400k and his price is largely due to the packs opened for FFS Round 2 and an overly poor TOTW21 in general.

While the review has been overly positive, the best is yet to come as Firmino stands to receive a +2 boost come Winter Upgrades.  Regardless of the effect on this card specifically it is always nice to know the cards in your squad are only going to improve.  There are really only two negative areas with Firmino and that would be in the defending (if you choose to play him further back, which I wouldn’t), and the 91 STAMINA that didn’t quite live up to the standard of the 95 STAMINA of the SCREAM.  Not a comparison in terms of either card's value, but a heads up that I did find Firmino tiring in the 80 – 90th minute and he was way slower moving in extra time.

While Bobby does not have a personalized chant in-game, I swear with every goal I scored I could hear Anfield ring out: “Si senor, Give the ball to Bobby and he will score” … and score he did.  I know that moving forward this card will make way to wider positions and eventually the bench for new reviews and squads, but I will remember this review for quite a while given the surprise it became.  From the first hat trick to the last minute winners this card just kept the production line turning over and was a key part of this past WL.  More importantly, the lower cost of this card allows for money to be spent in other areas without the drop off in quality and why I think he could be a key addition to numerous squads.  Cheers for reading. 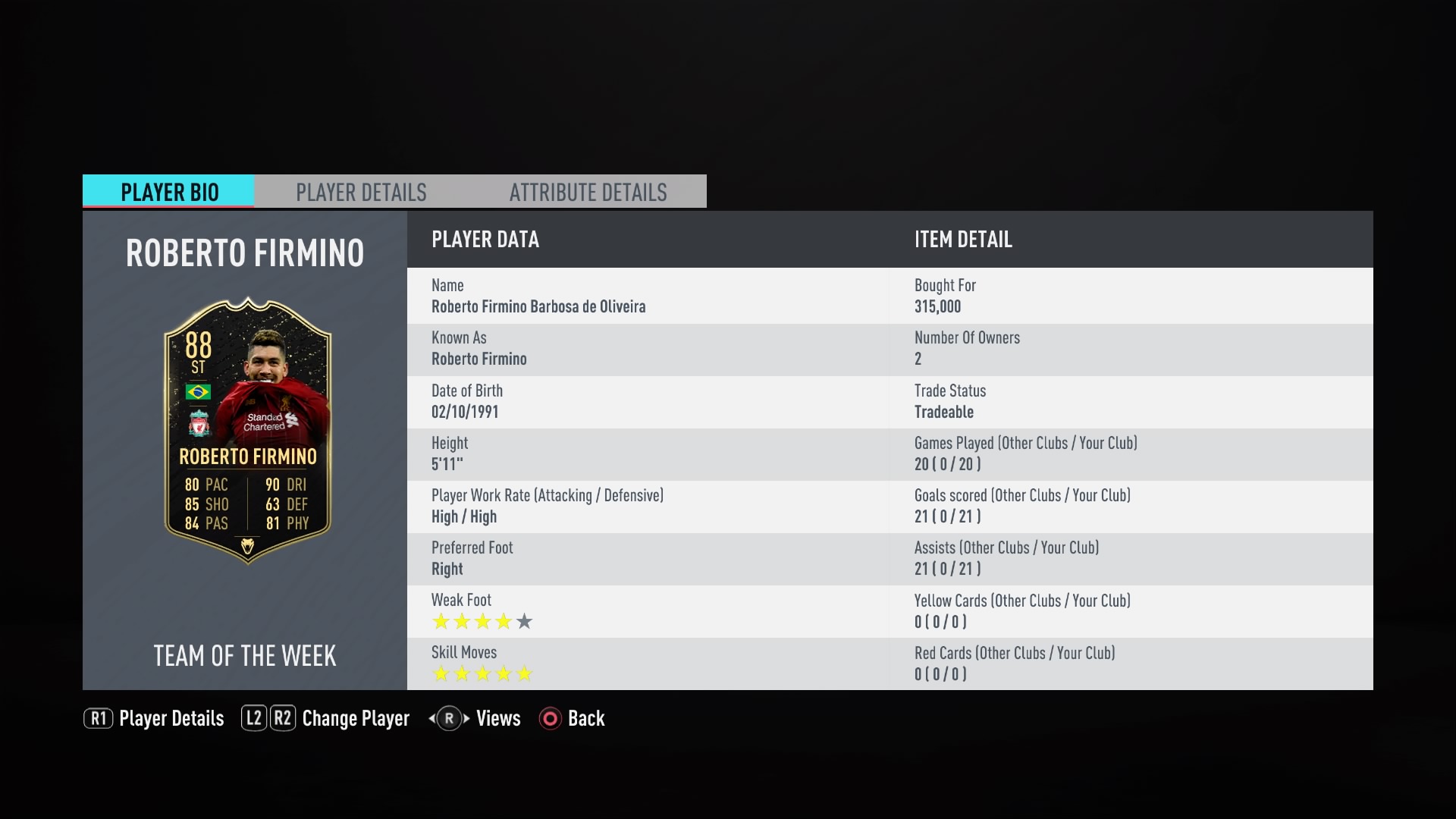