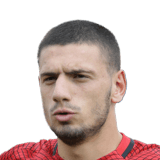 I'm turkish and because of that I am a big fan of Merih Demiral. When he finally got a Gold card, I wanted to try him for fun, but then I found out that he is one of the best CBs that I've used this year! I had Koulibaly in my team and replaced him with Demiral immediately after trying him out on a couple of games of Division Rivals.

-Animations (Defensive Awareness): He has crazy animations. He feels like a World Class CB on that aspect, he even tackles successfully if you only get near to your opponent, without even pressing any buttons

-Agility: Surprisingly, his agility feels very good if you do L2 Defending

-Pace (can be fixed with a Anchor or Shadow chem style; in this years meta you catch up to your opponent even if his player has 20 more pace than yours)