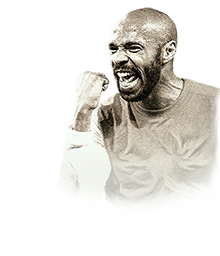 Hello everyone! This is my first ever review on Futbin and I felt like it was the right time to do it, right after using this true icon. Thierry is a very expensive player, with his price hovering on 4m coins, therefore not being affordable to a lot of people. Nonetheless, I packed prime icon moments Vieira and managed to get my hands on one of my personal idols. To kick things off, let's talk about the card in general: blistering pace, killer shooting, amazing passing for a striker, God-tier dribbling and good physicality. For this review, I'll be rating each stat with a grade from 0 to 10. Hope you enjoy!

Pace (9/10): yes, 96 pace is a lot of speed, the same as Mbappé's regulard card. However, Henry's pace doesn't shows off like a 96, more like a 90 or 91, probably because of his bulky body type in game and low balance, but still able to leave most defenders on the dirt.

Finishing (10/10): now let's talk about the cherry on top of the cake from this card. 98 finishing with 90 shot power and 91 longshots, along with 97 positioning. Henry can and will score at the first chance he is given, you call it: right foot, left foot and even headers (a lot of them!). This man is an assassin in front of goal (98 composure) and we'll rarely miss a chance when near or inside the box. Another stand out point at this department is the outside of the shoot shot that is completely broken in FIFA 20.

Passing (9.5/10): Henry's passing capabilities are tremendous given his 90 vision, 87 crossings, 90 short passing and 77 long passing. He can easily play as a striker with false 9 instructions or even at CF/CAM, even though not being of course at Messi's, KDB's and other top tier playmakers in the game level.

Dribbling (9.5/10): Another stand out point of this card. Even with his 1,88m (6'2") height, Henry feels very responsive and agile on the ball, having 93 agility, 94 reactions, 97 ball control and 97 dribbling. Despite all these endgame stats, it is here that lies the biggest downfall of this card: his 72 balance. Although being a big man, Henry gets pushed off the ball with quite ease because of his low balance that even with an engine chemistry style couldn't be fixed for me and that can be decisive in some games.

Defending (N/A): Being an attacker, I won't judge his defensive capabilities, even though he has stamina for days and often steal balls from the opponent's CDM.

Physical (8/10): Well, here is where I have mixed feelings. 72 jumping is enough for a guy of his height to have but it could be better. 90 stamina is just perfect for him given his M/H work rates, he can easily last 120 minutes. Now for the strenght: 82 is not bad, but could be a lot better, specially when combined with the low balance. When bodyed by big CBs like VVD or Laurent Blanc, Henry will 95% of the time .struggle to keep on his feet, being often knocked down (sometimes resulting in fouls).

So, as a DIV 3/G3/G2 player, for me Henry's PIM card was phenomenal and scored goals for fun, with a lot of hattricks and pokers in Rivals/WL.I would definetely recommend using him in a 442 with a fast, agile striker (in my case, it was 92 Laudrup) or as a lone striker in a 4231, playing the role of a target man. If you're the type of player that is not attached to the attackers meta of this year, go for him and you won't regret it!

Very good short and long passing, as well as crossings;

Can win you games.

Strenght (most of the time).

Price Tag (4 million coins in one player isn't affordable for most of the community).