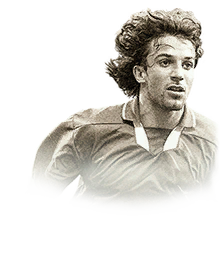 Ive played 100 games with this Del Piero card and he's one of my favourite players that I have used this year however he is what i'd describe as a luxury player. I first tried him on engine chem style as suggested but didn't get on well with him until i changed him to a Hunter chem style playing him as a CAM in a 41212 narrow. His shooting and finishing is excellent on both feet, 5 star weak foot is so OP this year and this man is the king of the finesse shots. His card is amazing to left stick dribble with and he creates such a nice tempo in attack and is always there for the one-two (L1+ X pass), his positioning is excellent, his passing is beautiful, pace was good enough to create energy going forward and he is the master of my attack. If your a fan of Del Piero or someone looking for a piece de resistance to complete a star studded team i would highly recommend him however ...

This man needs a good team around him, because he is weak and poor in defence generally he will not offer the same well roundedness as someone like Nedved. He was often bullied off the ball if dribbling too close to CDMs however he also found a lot of space in between defences and made excellent runs and finds space well. His balance never felt like a problem he is only 5 ft 9 therefore feels like a Meta player on the ball, his height obviously means he rarely wins aerial battles.

I feel that Del Piero is a player who accentuates how your playing, if your playing well he will be unbelievable for you and win you games single handedly at times, he is a lot of fun to use and i would highly recommend him as he will encourage you to play fifa the "right" way. However if your not playing well he will feel weak and will not be like Ronaldo who will barge through 3 defenders on a counter attack and get you a flukey goal, you have to work for the goals but once used to him you will love him.

Im a gold 1 player and have the team i used him in was:

I dont know why I dont see people using this genius , but he is simply amazing. This a real honest review, for eg : I played with a lot of cards this fifa 20 (96 messi, 99 maradona,96 cruyff,socrates,neymar etc) Del p is something different. His weakfoot is better than his original foot , shooting and passing is just unreal (one of the best passers of the game). People say FB modric is good , trust me this guy's passing is even better than him. His through balls rarely gets intercepted and his attacking position "OMG". I love playing with this card , reminds of del piero actually playing on the virtual pitch. Go for it ! wont regret it. Its surely an End game Card