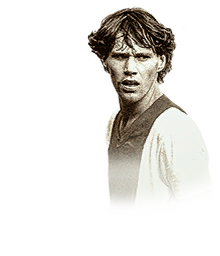 If you are looking for a TRUE striker in this game, look no further.

PIM Van Basten is the player that I say "taught" me how to play FIFA. Before him, I was consistently Gold, with the odd Elite finish. After I bought him, I started finishing consistently Elite, with the odd Gold finish. Let me explain how this card achieves this.

MVB can be run either alone or with a partner. He is a complete striker, with the ability to hold the ball up, make the final pass, and get in behind enemy defenses. He can and will finish EVERYTHING on both feet, which makes him unpredictable, even with 3* skills. Btw, if you're trying to skill with him, you aren't understanding what this card is actually good at. He has the finesse and outside the boot traits, and he his tall and has the cheese body type (high and average+). He is pacey and his size puts him over the edge. There's nothing like a 90 pace MVB taking these massive strides and ending up behind VVD, Varane, Boateng, etc. His dribbling is tight in small spaces, and he rarely has a bad touch. His RT sprint touches are crazzzzy good, because he kicks the ball far but under control, and like I said, his big body and strides allow him to seemingly cross the pitch with the ball in one or two sprints. In tight spaces, he's one touch, one finish. In the open field, he's this big body (who FEELS athletic) who is gliding across the pitch.

Now, here's where MVB "taught" me how to play FIFA.

MVB has m/m workrates and I HATE those workrates for attackers, because they're usually in bad positions, unless you give them instructions. The issue with instructions, at least for me, is that it makes you easy to read. Anyways, I thought I was going to hate those workrates, until I played with him in-game. Once I figured this out about him, it all clicked.

The trick to MVB is to leave all of his instructions on default, let his card's positioning stats do the work for you, and for you to play around what he gives you.

You get the idea. Ten times out of ten, where MVB goes, is where you need to play. If you allow his positioning to be the focal point of your attack, you will find so many chances to score as a team. His positioning is perfect, I said it.

For chem, play a CATALYST on him, not an ENGINE. The engine card is tempting, but the dribbling difference between an engine and not isn't noticeable (because of his body type), but the catalyst's pace and passing change is very noticeable. His base dribbling is already really good.

I have used him in Weekend leauge and he was amazing. I got gold 1 and he scored 38 goals and 12 assist in 30 games. When you shoot with him it is a goal. His dribbling is verry good and he is verry agile. he does have 3* skillmoves but I dont skill verry much so it was not a issue.

This is a review of Mr. MVB. How i came into acquiring this man was through some trading, I saw on PC that someone had put him for 240K bid price and had managed to steal him despite being 320K. I tried to sell him for a couple days but no one wanted him. And when I checked him, I was his second owner. He was a fresh card, because of this, it had occurred to me that perhaps I could try him. I tried him in a 4222 as a second striker to Halaand FS (check out my review on him). I kept MVB on everything balanced and also used an engine on him cause I was worried that with another chem style he would feel clunky. I would recommend to anyone wanting to use this MVB be it in draft or in your actual ultimate team that he is a definite YES. His record for me may suggest that he does not score that often as to the likes as Halaand but then again if he were used in a one striker formation I'm sure his record would be impeccable.

To review this players characteristics, his m/m work rates may dissuade you from trying this card but I've found that with his exceptionally high attack positioning it allows him to move into a position to either setup a goal or go on to score himself. I was trying to force the ball to him at times cause I had just purchased him but this doesn't allow me to get a result as I was rushing to see how good he was. But being patient and allowing the game to play as normal, I then saw that his work rates allowed him to dictate the pace of the attack. When moving forward he would sometimes drift into open areas where I felt that he was allowing more passing options for my team and therefore further benefiting my attacking, Sometimes he would also make the run forward beyond the defenders into open space unlike some other players that run into crowded positions.

His movement when in the box is also really really good too, he always allows himself to be free to pass to, but he also can play off the back of other defenders and hes quick on the turn but do not expect any insanely fast drag backs. His 3* skill moves may be a let down to some but I personally do not mind this as the fake shots as well as ball rolls and drag backs are good enough for my strikers. His height and body type allow him hold his own for a while before being pushed off the ball. He can be fast counter and with an engine the small boost of pace allows him to get into a shooting angle quickly. (His dribbling is also similar to Ronaldo (CR7) as they both possess the same height and similar body structure but without the 5* skills)

And to get to his shooting, it is simply unreal I'd compare it to Halaands in how powerful and how accurate it is on either foot. He also has both shooting traits which allow him to score from most angles as well and bend them. His 4* weak foot also is very good as his shooting is super high and is not really affected in the box when shooting regardless of angle or foot.

Dribbling if you expect anything super responsive