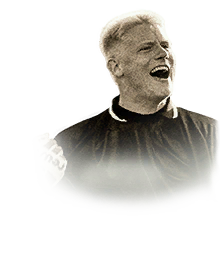 I tend to go big on my goalkeepers, so I can't complain when a goal goes in that a lesser keeper couldn't save. I've tried all the big ones bar 95 Yashin and the Alisson team of the years, and have to say that daddy Schmeichel is the best Icon variant I've used. Breakdown below.

Diving: Fantastic, outside of Oblak, he has been the best goalkeeper for saving near post shots for me this season. It may just be a placebo, but his frame just fills the goal, and without adjusting, he is brilliant at saving those shots that would normally go in.

Reflexes: As above, he has made some excellent last ditch attempts to stop a goal. Couldn't really fault it.

Handling: I'm not sure he matches the 95 his card suggests, but it is good enough. Something that appears to affect the Icon keepers is his ability to hold the ball when under pressure, or jumping over the opposition players, and he is no exception. Not a major weakness though.

Speed: Fine, there are faster keepers out there, but he was much more responsive then Yashin and Lehman, although not as quick as Edwin, and some standard keeper like Alisson or Ter Stegen.

Positioning: For the most part, great, although I found most goals I conceded were from finesse shots. I'm not sure whether I am correlating something that isn't there, but it felt like he was just enough in a strange position that he wouldn't get to them as expected.

Kicking: By far the biggest attribute this card has, and the reason I left it last. He has the best kicking I have used bar maybe Ter Stegen and Neuer. His throws are accurate and long, and his kicking can hit those corners of the oppositions final third like you would want to when playing out from the back. The main plus point between this card, and the other Icon goalkeepers in my opinion.

In conclusion, are there better value for money goalkeepers? Yes. If you don't need an Icon in goal, then he probably isn't worth the coinage. However, for me, he ticks that spot that the other Icon keepers didn't, combining all the attributes I was after, with fantastic kicking. It is why he ended up with a game winning assist. And for that alone, I can't say he has not been worth it.

very interesting... i used 93 Peter with PSG defence, marquinhos and silva. Now i have 91 Stegen with 86 militao and 89 ramos. Stegen is better .i dont know why only 89 Van der sar looking best of the icon keepers.

Peter has great reflexes.I remember him in real life.He is one of the best keepers in football history. But he doenst look like best keeper in game.

not a game saver or changer