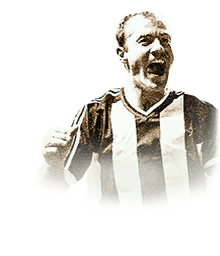 Jesus christ, Alan Shearer the EPL's top striker ever. Well it reflects that on fifa too, this man cannot miss. From wherever he is insane especially for his price, his shooting is top tier. But everything else, is meh. Especially his 2*, 3* combo is terrible. He is the clunkiest player I have used and his dribbling is like a drunken donkey. But he can certaintly hit the target and hold off his defenders. His pace is not great either, im not saying I need 99 pace but its still on the lower side, nor passing, he couldn't pass to a player 5 feet away from him. Overall I think he is meh at everything except shooting.

-Everything related to shooting

I had a spare 130K and decided to cop this Shearer card. I'm a manchester united fan by the way so I'm not biased. I used a catalyst on him and.. he was fantastic! Pace wasn't an issue with the catalyst chemistry style. Shooting was inevitable. 99 Finishing, 99 attack positioning and pretty much 99 on every shooting stat. his heading is also on point. Passing, I don't have anything to say about it because I played him as a lone striker. Dribbling wasn't the best but then again, I didn't dribble much with him. My cams were 94 Joao Felix, 94 bruno and 95 Pogba. Defending, can't say anything. I had him on stay forward. Physical was great, his stamina was fantastic, he could also shrug players off well. 2* skills is garbage for all you skill people out there. I don't really use skills so it wasn't that bad. 3* WF isn't really noticeable because of his shot power, shot accuracy, positioning and his finishing. I hope in FIFA 21 the weak foot is upgraded to 4. Work Rates were also decent. Overall, I would recommend getting Shearer if you want a lethal, clinical finisher. I advise you to use him if you want guaranteed goals. Make sure you use your quick wingers or cams to do all the work, then feed the ball to Shearer. He won't let you down. I don't normally give players 10/10 but Shearer is something else. One last thing is that the commentators seem to go crazy when Shearer scores a goal. Thanks for reading and have a great day!