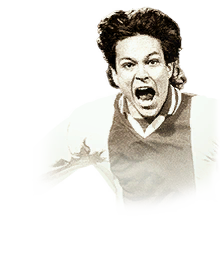 Alright, so Litmanen is 6 tokens and from what I've seen so far people are wondering whether to go with him or Laudrup. Personally, I am going for both and have recently got Litmanen and tested him out for those who are not sure about him because there are no more reviews about him atm. Let's get started (INITIAL RATINGS ARE WITHOUT CHEM STYLE)

PACE: 7.5/10 His pace is not great, not as fast as Laudrup or flashback Rooney. However, with an engine his pace is very good, 8.5/10 at highest. He is very swift with the engine and it is hard to take the ball off of him

SHOOTING: 9.5/10 Imo, 10/10 is only reserved for players like R9. This is why you buy/get the card. I play him at ST in a 442 alongside Flashback Wayne Rooney and he buries everything. Finesses from the edge of the box, one on ones, low driven, long shots, the lot. No need to be upgraded. His off the ball movement is superb, even better than the shooting. Gets in the right positions when needed, is there when he needs to be, can drop into the CAM role when he needs to, the best thing about the card.

PASSING: 9/10 Very, very good. Is a brilliant playmaker and has set up Rooney quite a few times for me. Very very good at it.

PHYSICALITY: 6/10 Not his strong point. Can be summed up by his 24 aggression. Can run for the whole game with 91 stamina

Overall, he is very underrated. EA giving him to us for 6 tokens is definitely a gift, he has outperformed Raul 88 in every respect for me who was 10 tokens in the last season. Unbelievable card, is worth picking up if you want some fun, a solid striker, VERY good value for time and/or if you are a fan of him. In my opinion, he his only 6 tokens due to lack of skills.

FINAL VERDICT: Better than expected, does everything that is wanted from him. Can play in heavy gameplay as well (my game lags pretty much every time I play)

Pace and Dribbling (WITH CHEM STYLE)

Pace and dribbling (without chem style)

Here it is, the super Jari, and for only 6 tokens. I am here to finish what I started when I entered in his Futbin page when the Icon Swaps 3 appeared.

He is a world class player, just so classy in the attacking midfielder position, but not usable as ST.

If you are against him, do not let him shoot. His 95 finishing, 90 long shots, 97 volleys... make every chance go in. His pass is just ok for cam, just don’t abuse with the long passing.

Obviously, he needs engine to boost his agility.

Take him, you won’t regret.

So this is my first review on Futbin and what better way to start it off than with this man?

Up until FIFA 20, I had only ever used Icons in FIFA 18 World Cup Mode but seeing as I could get a Prime Icon Moments card for minimal effort (I'm not a very hardcore player), I was determined to fit him in my squad.

And did he disappoint? Absolutely not.

If you have a question about my tactics or instructions feel free to message me!

*All in relation to using Engine chem style*

PACE - 8/10: Jari isn't a speedster, but he doesn't need to be. With Engine, he's quick enough to breeze past centerbacks and create enough space to unleash his Kraken of a right peg or ping a through ball in.

SHOOTING - 10/10: Elite shooting. Finesse shots, cross-goal bangers, clinical finishing, this man can do it all. His attack positioning is probably his biggest strength, he'll always find the right spot to be.

PASSING - 8.5/10: While his passing isn't Pirlo-esque or anything, it gets the job done. He's been able to pick out a pass or run from a striker or winger, but don't expect every ball to be inch-perfect. Engine definitely improves this and I highly recommend it.

DRIBBLING - 8.5/10: Similar to pace, it's not phenomenal, but it gets the job done for him to create space and play to his strengths. Also, only having 3* skills kinda detracts from this as well, but he has enough control to be able to shimmy and mug off a defender in the box.

DEFENDING - 5/10: Obviously you're not getting this card for his defending abilities, but he did surprise me in winning the ball back the odd time out. Don't expect too much from Jari in terms of being a ball winner.

PHYSICAL - 7/10: While it wasn't great, he still has just enough strength to MAYBE bully an average defender. Also, his stamina is insane ;) and could last the whole game if need be.