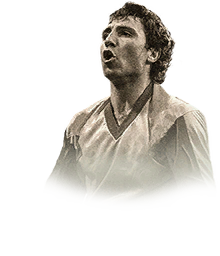 Day 869 of lockdown: With a small hiatus in content and only TOTW Moments Messi really peaking any interest, I decided to go and take a look at a player that has been on my radar for some time now;  Prime Moments Hristo Stoichkov.  Just one look at the base statistics gives you the idea that this card is going to be a force in attack.  However, what interested me even more, was the fact that I have never played against this card before.  Over 1000 matches, and not once have a came across this card … and really I can count on one hand the times I have played any version of Stoichkov.  I was interested to see why, come to my own conclusions, and to pass them on to you.  I set Stoichkov loose with a SNIPER chemistry style as the Left ST in my 4-4-2 formation. Stoichkov was El Pistolero in the following squad this weekend: 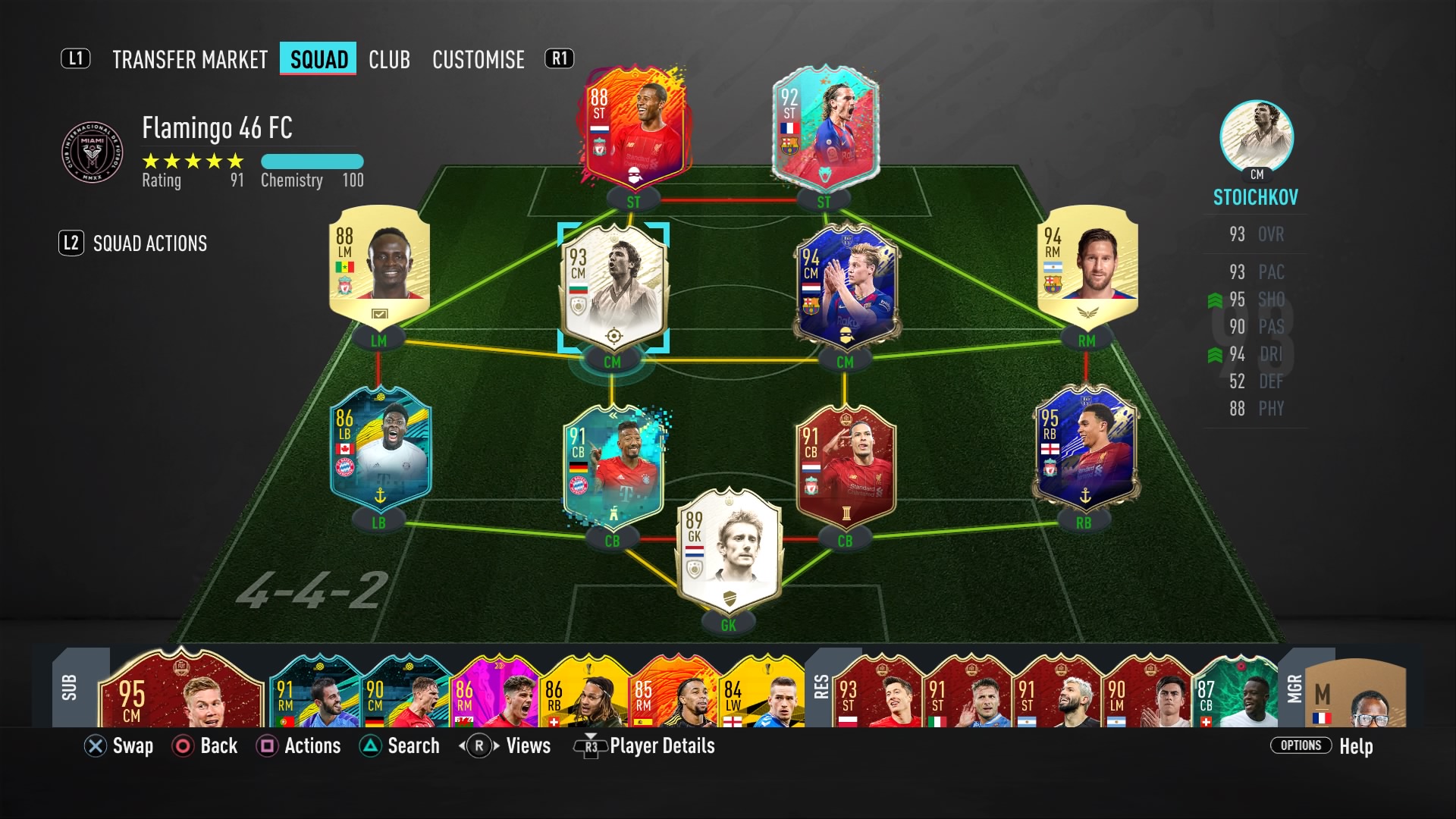 The ratings here speak to the card itself, and I just want to take a moment to explain.  Nothing above a 9.5; Stoichkov has a lot of weapons, but none stand out compared to the highest tier of players I have used.  94 ACCELERATION & 92 SPRINT SPEED are excellent statistics on paper but did not translate to the quickness that you feel in other options.  Similarly, the dribbling with this card is adequate and I found the 99 AGILITY and 92 BALANCE to be useful on the turn, but not as an effect in tight spaces.  The list goes on but I will save some for later as I want to talk about the other end of the spectrum. No ratings below 9.2; Stoichkov is maybe the most well-rounded attacker I have used to date.  There is simply no profound weakness in this card, none… okay, maybe the 3 STAR WEAK FOOT, but we will get there.

My classic ICON rating when not from a top nation.  Stoichkov can link into any squad and actually helped me bring in Van Dijk and TAA while keeping Boateng on 10 chemistry.  The lack of popular nation does limit other hybrid options, but overall an easy link.

Alright, we should address the elephant in the room.  The 3 STAR WEAK FOOT.  I still went with a 9.2 out of 10 for shooting because of how clinical Stoichkov is on his left.  He is insane.  His LOWEST ratings are 94 SHOT POWER & 94 LONG SHOTS.  The ball simply explodes off of his left boot and any goalkeeper brave enough to get a hand to his shots will have the ADIDAS logo imprinted on his fingertips for days to come.  Unfortunately, it is the exact opposite story on Stoichkov’s right peg, and unlike some options, I have used this year, the 3 STAR WEAK FOOT is 100% accurate if not a bit high… he feels more like a 2.  It is a crushing issue and is why I scored fewer goals than in past reviews and is single handily responsible for keeping this card from a 9.6/10.

If you were hit by the market crash like I was you will be feeling a lot lighter in the pockets since Friday.  I lost 300k on Stoichkov alone, which kills me.  However, my loss is your gain and really put this card into a bracket of good value options.  3 STAR WEAK FOOT aside, I cannot stress how amazing this card is in every other category.  The physicality is top-notch and Stoichkov can cast off defenders with relative ease.  This strength pairs amazing with the 90 overall passing to create a lot of time and space for his teammates, resulting in 14 assists this weekend.

38 goal contributions in 20 matches.  It definitely speaks to the involvement in the build-up play and just how lethal of a left foot Stoichkov has.  I almost feel like a 4.5/5 is a bit harsh given the positive impact Stoichkov had on my squad this weekend.  If you follow me on Twitter: @IVIaeday …for three weeks I have been tracking my gameplay and this weekend resulted in my best finish ever, 26 wins.  I mention the wins because Stoichkov played a huge part in this, and regardless of 3 STAR WEAK FOOT or not, he was a big part of my best ever squad, based on results.

At under 1.4 million coins you could do a lot worse than a card of this versatility and quality.  However, I would not recommend Stoichkov to any FUT Managers who play in a single striker system.  Generally speaking, the goal load falls a little more on the shoulders of that one man and I would suggest 4 STAR WEAK FOOT being the minimum requirement. But, if you are like me and utilize a more goal sharing system with two strikers, or you have a favorite striker and cannot find the right partner, I would strongly suggest giving Stoichkov a weekend to prove himself.  He is a warrior and fought for me on the frontlines this weekend with amazing consistency, and I know he would for you too.  Cheers for reading. 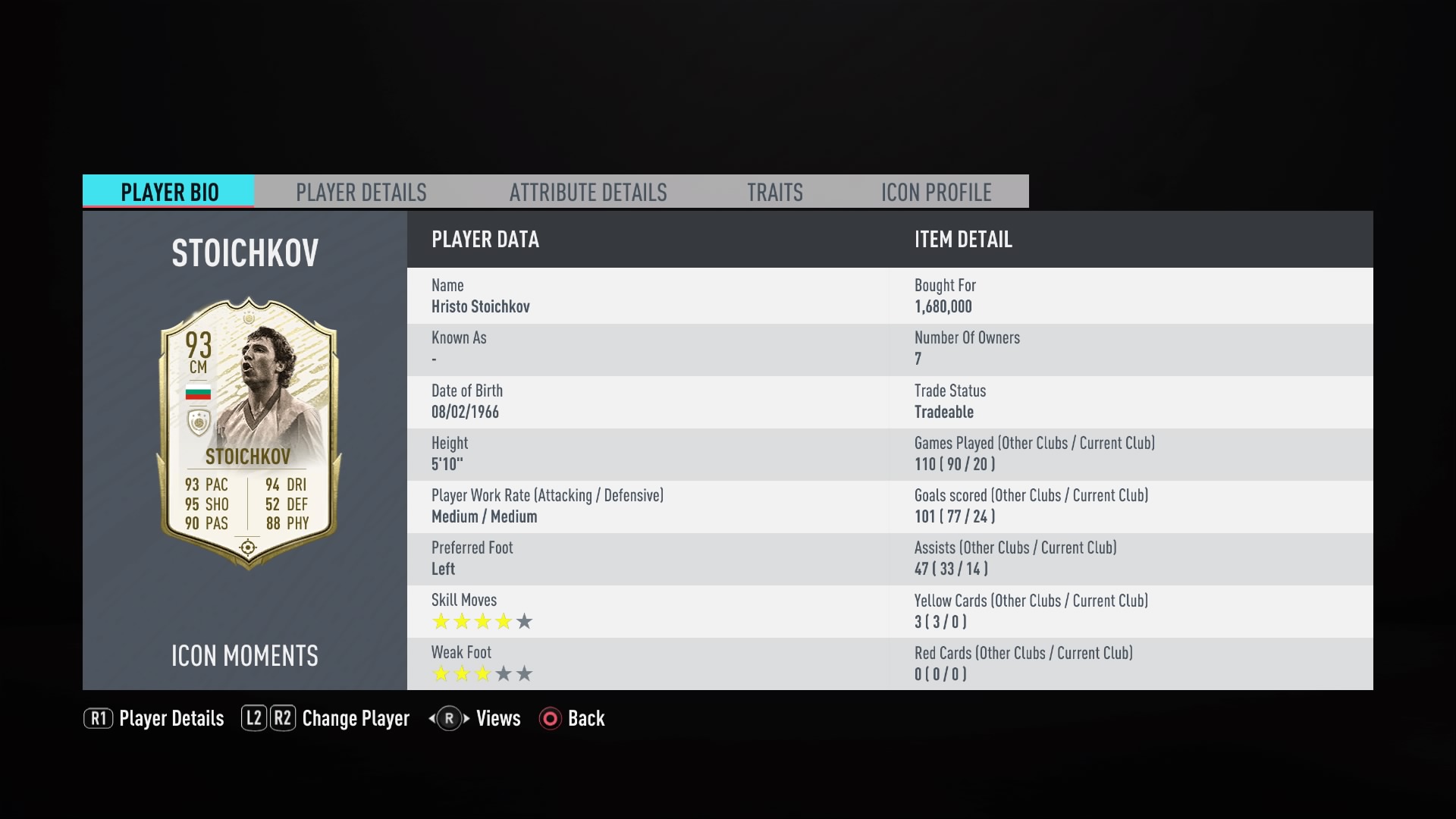 I bought a lot of players to try this beast and i don't regret it what a phenomenal card it is. I haven't used r9,eusebio,cruyff,dalglish but i know that stoichkov is unbelievably good he is just superb. He have 48 games for me and scored 76 goals and 37 assists. Unbelievable stats, how is this guy only 1.9 million that is a scandal.

You have to buy him don't regret it at all.

3* weak foot but it feels like 4 star or sometimes 5* weak foot.

I bought Zola Prime Moments as striker, but he disappointed me. He was weak, no strength at all and he didn't feel that fast. So I bought Stoichkov because his card looked insane. His price as 860 k, which i don't think is a big deal, if you take a look at the card it self. And WOW. The strength, pace and shooting was just phenomenal.

He felt very very fast, and he could easily run away from defenders. His strength made him untouchable when he ran into defenders, and they just couldn't take him away the ball. It felt like the ball was stuck to his feet. His shot (when he used his left leg), was insane, everything went in, and the shot power just smashed the ball into the goal. But he did have 3* weak foot which I doesn't like, especially when it is a left footed striker, I somehow prefer right footed strikers. He can shoot with his left foot, but 8/10 of the shots have no power, and the goalkeeper can easily catch the ball. His passing for a striker is very good as well, which means that he actually also can play a CAM role og even CM. He has 4* skills moves which is enough for me, he can drible past almost all defenders in the game, and he feels very agile too.

Stoichkov does have medium/medium workrates, but it actually doesn't bother me at all. He goes deep into the pitch, and sometimes he actually receives the ball in the middle of the field. But with his dribling skills, pace, strength and passing it is no problem for him, to run a lot and drive the ball forward.