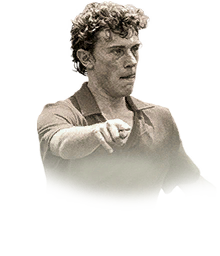 Oh my oh my, this little lad has been insane for me. Just to lay some reference points in why i feel im able to review this card objectively, is that i have used some great strikers before

He is of cause not as good as the Draft guys, but on level with Garrincha.

I uses a Maestro on him, and i would not change it for the world.

Shooting (10/10): HE. WILL. NOT. MISS. He bangs in everything, left, right and center with an insane velocity from every angel possible with both left and right foot. In addition he has the fineseshot trait, which is just a nice addition.

Pace(9/10): He is quick, very quick! However he is not the fast runner, Kent-ish player. he has an insane burst of acceleration, but on the distance he, like every other player in this game gets catched by the defender.

Dribbling (9,5/10): This guy just turns as he wants to. He is so small and agile with high balance, combining that with his high acceleration, just makes your opponents defenders dizzy. Left stick dribbling has never been more fun, and he makes Messi feels like you are playing with Drogba. The only downside is that he is only a 3* dribbler. If he had higher he would be up there with Eusebio i believe.

Physical (3/10): Yikes, this is the only downside. Due to his small frame, he gets pushed off the ball if you let any defender come close. But it is actually possible to keep the defenders away due to his high dribbling. However there is this one wierd thing about him, he can jump like Jordan, and actually sometimes win arial duals. Im not saying he is gonna be winning duals against Van Dijk or something, but the smaller defenders he actually stands a chance. Stamina wise, he last for the whole 90 minutes, overtime is an issue for his tiny legs.

Passing (8,5/10): This guy can also pass! especially with that chem style ofc.

Overall: (10/10) he is by far the best player i have ever had on my team! He makes the game fun again. He is just what my team needed, a deadly, quick, agile, two footed, little spaniard.

He has now played 22 games and scored 36 goals, all from WL.

Wow where do I start

only played div 2 rivals so far but can’t wait to tear up WL!

this card is seriously unreal. Forget the 3* skills, this guy could find space in a single bed with Gemma Collins

he is the sharpest player I’ve used on this game and I’ve used all Ben yedders, all neymars, Messi, mbappe, tots aguero (rubbish) and so many more. Butra is so agile it’s a joke

he is very fast and easily beats players for pace, however his only let down is his strength.

his finesse shots should be illegal they’re got tier, and his 5* WF means his shots from either side of the box are going in with the finesse shot trait!

his passing is reasonably good, you wouldn’t play him CAM to create (he would be great as a goal scorer) but at ST he’s unreal and causes so many problems. I get elite 2 most weeks and this card has people man marking him with CB and CDM so if he doesn’t have a chance to score then he makes so much space for everyone else to drive into the box

Never used R9, Eusibio, or Pele but ive used most of the other big boys. This guy fits every single meta and abuses the meta disgustingly.

You will win more

You will feel like a scum bag for using him.