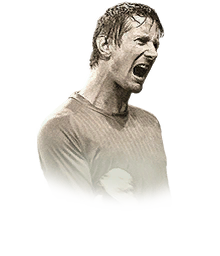 Got some spare cash and was in the market for a goalkeeper after selling Allisson TOTY which I was fed up with (he cost me 5-6 wins with stupid mistakes and rebounds last WL). Went through several comments and reviews, majority of which says that all the goalies are pretty much the same. And while last goalies I had, all had the same problem - were conceding a lot of near post goals and were giving the ball to the opponents after silly rebounds, I thought this was probably the truth and wanted to end up with Ter Stegen or lloris. But somehow, I ended up buying this guy instead (was curious about him), and I can say for the 20 rivals I played with him, he convinced me that he is staying in the club. Amazing gk, cant wait to try him out in WL tomorrow, he gives a lot of confidence.

He is insane I played 32 games with him and I only conceded 7 goals and I am horrible at defending he saved me multiple times and with his kicking I managed to assist myself 2 goals his kicking feels like it is 99.

Clearing with his hands (Throwing the ball away)