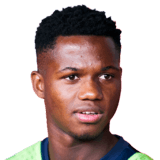 -
Sub out
Upcoming Matches
P. Chemistry
Squad chemistry
ST
69
RW
73
LW
73
CF
72
RF
72
LF
72
CAM
72
CM
65
RM
72
LM
72
CDM
50
CB
42
LB
51
LWB
55
RB
51
RWB
55
Reset
Basic
Sniper
Finisher
Deadeye
Marksman
Hawk
Artist
Architect
Powerhouse
Maestro
Engine
Sentinel
Guardian
Gladiator
Backbone
Anchor
Hunter
Catalyst
Shadow
Comments
Reviews
0
/600
Update my avatar Dos and don'ts
Top Rated
New
Controversial
Show comments
Top Reviews
Only logged in users can submit a review
A review must be written in English
At least 200 characters are required.
Compare this player to other similar players you have used(optional).
If you import your club to FUTBIN or send us an image with the player data(fill the form below) your review will be marked as verified.
Include what you liked about the player in the pros area and what you disliked about the player in the cons area.
Your review will be manually checked during the next 24 hours.
Chem Style Used
Formations
Position
Rate Player Base Stats (1-10)
Pace
5
Shooting
5
Passing
5
Dribbling
5
Defending
5
Physicality
5
Most Used In:
Submit Review

Right, I'm going to start off by saying that I am not a Barcelona fan and I am going to give an unbiased review on this card. Okay, so basically I packed this card and thought why not try him in Champs for 30 games, and he was starting along side the likes of TOTY De Jong, Messi etc. so I was not expecting much and was playing Champs because I was just too bored. I played him at LF.

30 games later and I'm shocked to say the least. He was the 2nd highest scorer for me. 21 goals and only just behind Messi, whose 24 goals was just about better than Ansu's goal record.

Now onto how he felt in-game, and just to say something, I'm a Gold 3 player who is in Division 5 in Rivals so I'm not such a great Fifa player. Anyway, he was great, and felt very nimble with 88 agility and 83 balance, and 4 star weak foot coupled with 4 star skill moved made him a joy to use. 88 pace also made him feel rapid.

I'm going to end my review here, and using the likes of this card makes me want to use more silver players in Champs!

Honestly, it was such a great surprise that he 30