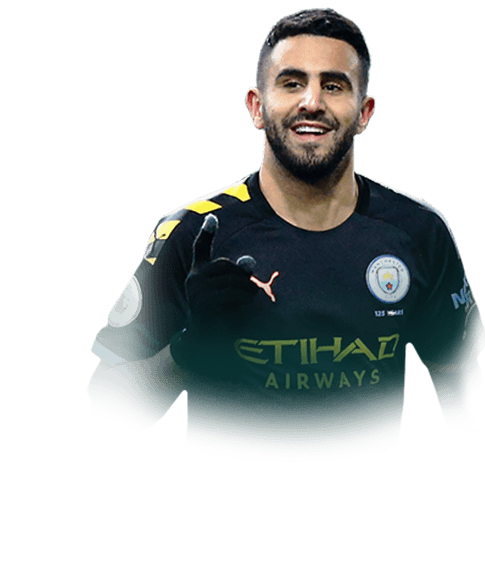 Riyad Mahrez's SHAPESHIFTERS card is rated 89, he is 179cm | 5'10" tall, left-footed Algeria midfielder (CAM) that plays for Manchester City in Premier League with High/Low work rates. His average user review rating is 3.2 out of 5 . He has 4-star weak foot and 5-star skill moves, giving him the ability to perform every skill move in the game. He does not have a real face in-game. Riyad Mahrez has 7 special cards with ratings between 84 and 95. He was born on 21-02-1991 and he is now 31 years old.

His real-life stats are currently 0 goals and 1 assists in 6 matches in domestic competition. He also received 0 yellow cards and 0 red cards.

I´m more of a fun player, currently in Div 3/4, playing some Weekend Leagues. I´m playing a lot with skills and I searched for a strong link to Sane. I saw that Mahrez and just wanted to try him out. I´m actually in LOVE with this card, agile, fast, has the 5 star skills, which is a lot of fun. He basically scores in every game and has decent assists too. I feel like he is just the player I needed. With Sane and Sancho out on the wing and Reus at CAM delivering for him, it´s a fun combo. Have been using him sometimes as left CAM or central CAM, seems decent there as well. (Using Carlos as CDM and Hakimi LB for anyone clicking on thelink of my Squad.)

yeah guys i love to try him out after tried his load card very impressive with finesse shots, so i purchase him for 430k ooops now i almost lost 150k in 6 hours. compared with his RW IF this card workrate updated now you can play in cam position he always in right position. i love to share what beauty of this card, oh my man his finesse shots are absolutely rock another level just another level almost feel messi ingame. But problem his, other than finesse he lacking in finishing he took 5-6 shots to score one. if you take finesse 100% goal im sure on that but i hate his finishing man very very poor dono maybe ea repaired this card in upcoming days. second thought dribbling i tried him with deadeye maestro & sniper he feels very very smooth 5* skill move make this card very smooth. so much love on his dribbling. if you are dribbler 100% suggest this card otherwise stay away from him.. use your coins on someone. another problem his stamina i set stay forward inst., still he dead at 70mins false stamina stat im sure on that ea did something bad on this good card. after 25-40 matches i put him in market tats all story ended very fun card you can score outside no problem at all, but inside box he bad.

I packed this guy in a Fut Party Bag and he hasn´t been disappointing. I use him as right striker in 4-1-2-1-2(2) with get in behind and open to the wings. His main virtue is obviously his dribbling, he feels so smooth on the ball, always touches the ball before the defender. He doesn´t turn as fast as Bernardo Silva moments, but i think that he loses less balls than Bernardo. Hes pace with hunter is enough to a 40 metres run without been cathed by the defender. His shooting on his left foot is awesome in the power shoots, but a bit dissapointing in the finesses. His passing also is incredible and his stamina is more than enough to play 90 minutes. The only bad thing is that almost every defender beats him in strength.

Bought this card and in his first game he was great felt good on the ball and scored a really nice goal. After that he just sucked. Can't finish for his life, he would be right in front of the goal but would still shoot a shot wide right or wide left. He 4* Wf also didn't feel like a 4* week foot

dont be deceived by this card. on the face of it as you can see the pace stat says 89. like many things EA tell us this is a lie. Question - what do mahrez and a morbidly obese boy from slough have in common - two things - their looks and top speed. this guy is so slow that you could stick llorente (34 pace striker) at CB and he would catch up with mahrez in a heartbeat. one night i decided to buy this card once id injected way too much heroin and i dont know how its possible but this guy actually got slower (probably because time was seriously dilated but never mind) next up we have this snails shooting ability. . . moving on we have have his passing. Decent but if your on his right foot then forget it because his supposed 4 star weak foot is so bad that when you kick the ball it feels like a man with erectile dysfunction trying to ejaculate. to be fair to the man he can dribble and if your scum of the earth like most fifa players then youll enjoy dancing round normal people like me with his 5 star skills (if your reading this and this applies to you i hate you). Defending and physical are pretty self explanatory my advice is dont get into any physical altercation with any other player whilst using this card because 11/10 he ends up in the stands. in conclusion i know any one in their right mind wouldnt buy this card and if youre seriously intoxicated like i was then i know it seems like a good idea but trust me thats the drugs talking.