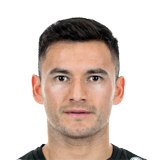 I got fed up with weekend league as we all do. I felt like my players weren't doing things right and I was losing. So I changed to a completely new team using untradeables I had. This team was a bundesliga team that was missing a couple players. So I filled it in with OTW Hazard (Thorgan), Bday Guereiro, Hakimi, and then I was only missing a LCM. So I looked at my options and because I didn't sell my other team my budget was rather limited. Aranguiz fit the price and with a chem style didn't look too bad. What a great decision that was. With my new team I'm having a lot more fun and that is largely because Aranguiz and Mckennie are bossing it in the midfield.