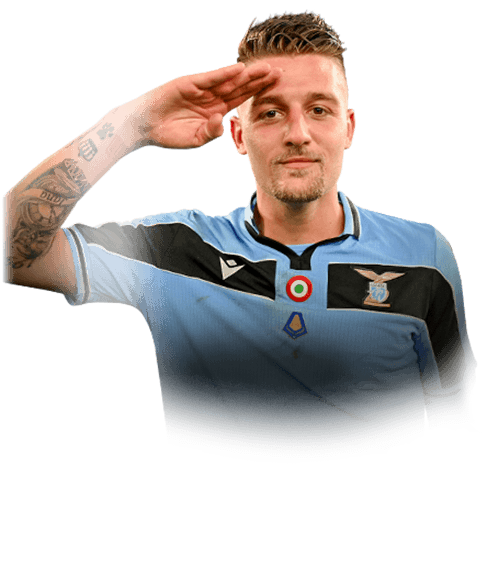 so milinkovic savic, if you are looking for a tank on the midfield who can defend for you and score your goals this is your man. I played this weekend's weekend league in a 4-2-3-1 with him and nainggolan 85 inform on the CDM positions, with nainggolan on stay back while attacking savic had the chance to come forward attacking and score some nice goals or set another teammate up for an easy goal. I run this card with an engine which gives him more pace more agility and balance and some more passing. now he is a bit sluggish but if you don't mind that on your CDM you'll like him for sure. he's just one of those really solid players. now there are some downsides such as his pace, he won't be able to keep up with some very fast players and sometimes when you turn he takes a bit too long which can result in possession loss if you're not careful. for the rest I see no downsides, he's good defensively he wins his duels he scores his goals has a very nice pass and that's all you need to know for this card. I would definitely recommend this card for anyone who's looking for a CDM that can bully some attackers but can also come forward.

shooting: his shooting is good, he'll score you goals but he won't bury chances like a ronaldo or an mbappe would for you.

passing: he has a surprisingly good pass that is always consistent

4 star 4 star: the 4-star skill moves helps out massively and the weak foot makes for good shots and passes with the weaker foot.

defending and physical: I would say these two categories are on a level where you could play this man on center back if you really want him to.

dribbling: it is obvious that he's a stiff player because of his height and agility and balance, I personally didn't have any problems just by being careful.

pace: his pace is not great, with the engine it's at an acceptable level but he won't keep up with any players above 90-ish pace.