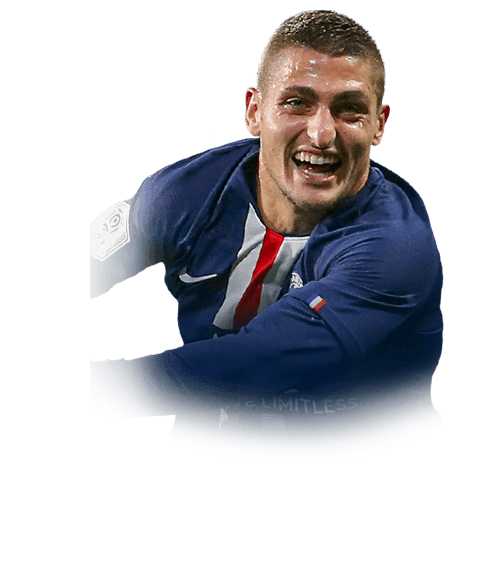 His real-life stats are currently 0 goals and 0 assists in 8 matches in domestic competition. He also received 3 yellow cards and 0 red cards.

Due to the fact that I have an untradable totw neymar, I have waited long for the ligue 1 totssf squad to be released. My first interest was Renato Sanches, and then Aouar. However, due to a limited budget, I started the week by trying Verratti first. And this card has absolutely schocked me.

I play 4321/41212-narrow in game. My 3 midfielder before was De-Jong TOTY (Shadow), Gullit 93 (engine), Allan 91(Anchor). Verratti (Shadow) comes in together with totssf Van De Beek (Engine) to replace De Jong and Allan. HIs driblling stats out perform all other players in the midfield. Or maybe not the stats only, it's his model and the stats together, that makes him great in dribbling. He turns quickly as if there is no such thing called momentum. With Shadow, he accelerates like a ferrari. Of course, you just don't use him to dribble half the pitch to hit the bottleneck of top sprint speed. Defensive wise, I am used to playing Kante like small but agile&quick players to challenge the ball holder. Verratti is also very very good at this. Strength is a Con, you don't knock an opponent off the ball by simply rushing into him. However, with a little bit left stick movement, combined with good jockey/sprint timing, verratti is a wall in my midfield. Moreover, his strength in attacking is not a problem at all. With such good balance stat, he doesn't get bullied easily by opponent players.

Considering his performance, I am not going for Renato Sanches now, I feel this card is a real bargain in the market. And as a organizing CDM, he probably is my first choice. Other organizing CDM I have used are:

To summarize, I believe this is a card you must have, if you can get the Chemistry working. This card is so cheap, which in turn saves you another million coins for upgrading other positions.

having pack him in the guaranteed pack i was a little disappoint due to his price, but he should be double it for how good he is. he feels fast and his defensive stats are amazing, play in rivals he won me 2 games by intercepting a through ball then providing an assist. his dribbling is amazing. he rarely loses the ball and runs rings around the other teams defense. he scored a few goals just from his high attacking positioning and decent finishing,

sprint speed( can be boosted but I didn't)

Looks like a Gullit gang player stats-wise, but ingame he feels not that good. Defensive he is very bad, especially because of his height. Also, he felt very slow for me off the ball. The only positive thing about this card is his dribbeling, which I found very nice. Also tried Thiago TOTSSF, and this card felt the same.