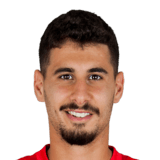 This player is definitely the best choice out of the 3 available IMO. He's Portuguese, he's a Left Mid and therefore has half decent links. Many players use La Liga fodder to use in SBCs and this guy links to them. He's also a LM, and LMs tend to be more expensive options for SBCs. The other 2 cards can't compete with the SBC value of this Gil Dias. Miranda has the links but at only 88 rated, he's not quite as usable in an SBC. Sabbi has horrendous links. There's only 1 choice.

>The fact he's 89 rated. With Miranda, you just don't get that +1 ratings boost for whichever lousy SBC you want to submit him in.

Although everything has been positive about this card's usability in SBCs, there are a few cons to probably mention:

>Although has useful links to fodder, he's difficult to link into a team. Not saying you would want this lacklustre card in your team, but there are still limitations if you want to build a fun/crazy/un-meta team

>The fact you have to play some FIFA 20 gameplay to actually acquire this SBC beast.