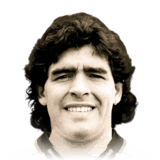 Hello everyone, first of all, i apologize for my english

Of course he's great, no doubt on it... You should go for it a 100 time, Do swaps if you have the courage, if you haven't you can buy it he worth all the coins.

I played him with hunter. I love his dribbling and shooting, that's his main strenghs. Pace and passing of course are also very good. All the aspects you expect him to be good, are 100% satisfying.

His physical ability are not incredible, he cannot resist contacts with strong defenders but if you play him smartly, that's not a problem.

His main weakness is his 3* WF but it happens that he makes surprinsing good shots with his right foot. Don't hope either to play with the two foot all the time.

If u debating on doing him for icon swaps, j do him bro. He's so good. Put a hawk on that. He quick asf n and his dribbling is without a doubt the best in the entire game. The only downside to this card is his 3* week foot which I haven't had a problem with yet and his stamina. Now with his stamina I advise you buy like 20 player fitness items if you don't have many which are only 200 coins because u are gonna need to put one on him after each game. With that said his stamina won't be too bad. His long shots are amazing with a hawk adding onto the shot power. He's only played a few games but he has scored several bangers outside the 18. His passing is unreal mostly cuz of the 95 vision, he sees the whole field bro. He makes brilliant passes. One other amazing stat he had was positioning. His positioning was always perfect, making runs and he was always all over the place. His reactions allow him to always be at the right place at the right time.

Unreal pace even with only a hawk, he is so quick and moves past player so easily

Passing is outstanding, I thought in this year's Fifa passing wasn't important til i played w Mara. His vision is great.

Strength is decent with hawk, able to hold off defenders and the 95 composure helps.

stamina obviously but just apply fitness consumable after every game it ain't that hard.