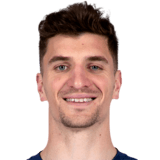 Ok. Lets acknowledge the elephant in the room. Its September, nobody is interested in this game and Fifa 21 is around the corner. But those who are reading this (I am not sure why) I would definitely recommenced this SBC for two reasons. The first, well, its cheap. SBC FODDA for some and frankly this is the main reason I did the SBC. However, during my penultimate weekend league I decided to try him out. And lets just say he was nothing short of spectacular. Best RB in the game. Fast, strong, great defence and attacking positioning. I have no complaints whatsoever with Meunier (if I was being picky I would say a con would be his agility and balance, but you can hardy feel that.) Playing him with Reus, Witsel and Hummels concocted into a formidable defence and midfield, Meunier being Man of the matched in his first two games with sublime outside the foot crosses to a waiting Suarez and Sancho. So, if anybody is reading this. Meunier’s sbc is a highly recommended one, if you are still grinding the weekend league. Stay chill Fifa community. #Meunier THE RAT #Watch the Rat to the Glory Series by NickRunTheFutMarket!!!! THE POSTMANNNNNNNNNNNNNNNNNNNNNNNNNNNNNNNNNNNNNNN

I know i know, EA is trash, FIFA is trash, FIFA 21 is here and all. BUT. Hear me out. 81 rated?? for a RB comparable to my man TAA? excuse me while i smash repeated smallings and sommers into the SBC. Tall, strong, fast, and overall a very well rounded card. I use sancho as a CAM in game, so Meunier is the boon to bully that IF Mbappe off the ball, distribute it excellently and make sure no-one dominates the right flank excpet for him?? yes please. Definitely worth it, although not as fodder, since he's THAT good. Slap on an anchor and watch those LWs fly into the stands

First of all I use him as an LB because I have Lala at the other side, so he hasnt got max.chemestry, but he still plays really good, and I also change his position to CB at the beginning of the game and I put Alaba CB at LB, because he has 60 balance, anyways he doesnt feel that slow, and he is 191, so he is like a complete CB. He is really easy to get, you only need an 81 squad so I would tell you to do it, even if you are not going to use it, and I know that FIFA is dead, but anyways if you still play it, it will be a really good card