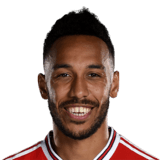 I played him as a solo get in behind striker. I would give him through balls past the defenders and he would run on 1 vs 1 with the goalkeeper. His pace is great for counter attacks and his shooting enables him to finish off his runs. Overall, he's a decent striker and he will do his job most of the time but he's not the most clinical striker or smooth dribbler. If you just want to send him a through ball for him to run at the opponent's goal then he's your man. But if you want to shoot with him from anywhere and to dribble a lot then I wouldn't recommend him for that as he's not as technical in that department due to his height and poor balance and agility.

-Pace: Very fast player obviously. He will outpace most defenders with ease.

-Shooting: As long as you're inside the penalty box, he will finish into the net. Decent finesse shots inside the box too.

-Volleys: He has no problems hitting some sweaty volleys into the goal with power.

-4 star skill moves and 4 star weak foot: You can do a lot of skills with him and also shoot well with his weak foot.

-Long shots: His long shots outside the box are kinda weak.

-Dribbling: I think this was my biggest issue with Aubameyang. He feels very clunky and heavy on the ball. 76 agility and 69 balance. You can really feel it. He does not have a close body ball control. In my opinion, he does not feel very good on the ball.

-Medium attacking work rate: For me, he didn't want to make runs forward on his own even with set instructions on get in behind it was very hit or miss if he would make a run forward.

Played him at ST in a 4231 and he has been unreal, finishes everything, electric pace, 4 star skills and weak foot, Carried me through Weekend league. He is pricy but 100% worth it. Get this dude in your team. Sniper or Marksman best chem style

-Finishing (puts away everything)

-Dribbling could be a little better

I bought Aubameyang because he had a strong link with my untradeable Lacazette and I wasn't very happy with Vardy recently (although he wasn't bad, but I needed changes), so I decided to try him. I had tried lacazette and I prefered him as a CAM, and now I'm playnig him below Auba. Since the very first game, he has carried me, and I have won almost every with him. He has scored al least once in every single match (I only have played Division Rivals) and has saved me in a lot of games. It's very important to put a snimper on him because that will improve his shooting and dribling, especially agility and balance. I haven't had dribbling problems with him, I felt so smooth running and dribbling. He is faster than it looks and he rarely misses a shoot in front of the keeper (believe me, with his pace he will be able to shoot more than once in every single game) and can also pass well the ball. He is really really tall, so he will also win headers and grab L1+triangle even against good defenders. It's true that he won't score beauties because he isn't good at longshots and volleys, but he will guarantee you a goal contribution every single match. I also played a game in Squad Battles where he scored 3 times and gave 3 assists, but that stats aren't counted in the final stats. I was also playing a game but I lost the connection, so I didn't counted that match in the stats.