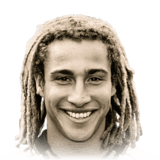 I'm making this Review because there is none right now and also no one on youtube...like WTF ??!! Ok, first of all, I bought this guy for way too much. Like 1 mil. but I always wanted him since FIFA 19 (also a big Sweden fan btw)

This Guy is insane I played like 50 games already and he's smashing everything (50 games,60 goals,17 assists) I played lots of attackers like CR7, Lewandowski second IF etc.

He's actually way better in a double attacking system than in a solo.

but now I'm getting to my Pros and Cons

PS: He doesnt worth the Money right now (before the TOTY) if he drops, and he will drop to like 850 or something like that then he is completely worth his Price.

-His dribbling stats paired with the height of 1,78m is kind of the meta

-3-star skills (for some players)

-his Balance but you don't even feel it in-game

OMG.Henrik Larsson is a tank,14 games in weekend league and 29 goals and 6 assists,He is my favourite striker ive used on this game.I have used players such as mbappe,neymar,messi,potm aub,shevchencko.He is fantastic.I play him in a 4231 with Neymar Messi and Mbappe behind him.I use him wi a hunter as I feel as if his dribbling doesn't need the boost. His pace is brilliant watch him whizz past defenders.His shot is deadly nd breaks the net everytime he shoots.

Strength is beastly even at how low it is

First of all, as a Celtic fan, I've wanted to buy him since fifa 18, and specifically this one for the dreads. First of all, he is definitely worth it at 200K, although I bought him fresh 2 weeks ago for 245K. I play him in a 4-4-2 alongside moments Drogba, and Larsson is just the perfect secondary striker. If you need to shoot with him, he'll probably score, but he's much better off playing second fiddle to a better striker. Not the best return, 107 games, 72 goals, and 60 assists, but considering I only take 1-3 shots with him every game, I'm content with his output. With a hunter, he is rapid and his shooting is top gear, if he had 90+ agility and balance, he'd be going for 500-750K on the market. If you are Swedish, a Celtic fan, or you have dreads, he is definitely worth the 200K price tag.