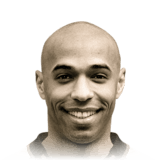 This card is something else. First thing I have to say is that if you are looking at this card is because you want him at your ST position. If you are looking into it wondering if it could work at LW the answer is that there are better cards in terms of value for coins. Unless of course you have around a 10M budget which most of us don't have.

With that being said, 90 rated Henry is a beast I didn't give him 5 star value for coins because 1.4M is really expensive. But when you think about the top tier striker options you have this card stands out and the only reason no one talks about it's because of that LW position. I have him paired up with Aguero in a 4-2-2-2 in a team of 2.2M switching him with Lucas Moura to left CAM.

The reason why you should pick him up is simple. He can do it ALL. He's such a complete player; he is fast, a clinical finisher with the finesse shot trait and his 18Thi (6 2) height allows him to protect the ball not to mention that even with that height it's amazing how good of a dribbler he is.

All in all you'll find that he's a one of a kind player that really gets slept on. I consider him the best striker in the game along with Pele, Ronaldo, Dalglish and CR7, being the cheapest of them all simply because you have to switch his position in game.

Pace: He feels so rapid that it's aubameyang-like not much to say here.

Shot: You simply won't find a better finisher. On top of that he has the finesse shot trait so you'll find yourself comfortable shooting with him in any situation thanks to the trait and his 4* weak foot that almost has no difference with the 5*. He also has a 90 curve rating stat that is top notch, specially on finesse shots. I use him with hunter to up that 83 shot power to 93 which makes his shot simply insane.

Dribbling: He is so agile and such a good dribbler for his height that is unbelievable, he definitely exceeded my expectations.

Physicality: Has an OK stamina rating that won't give you any trouble. His height along with that 80 strenght will help you protect the ball from strong defenders.

A few things to consider depending the type of player you are:

He doesn't have 5* skills, I don't have a problem with it since 4* is fine for me but if you rely too hard on skills then you might want to look at another player.

He has scored headers for me but it's not his specialty. 67 jumping does not help him. If you center the ball a lot you might want to look at someone like Cristiano Ronaldo.

His 63 balance. To be honest I mention it because it's something that stands out when you look at the card. But not a single time I have noticed in game that he has a 63 balance rating since he's so good at everything else that covers it up.

He doesn't really have any cons as long as you have the coins to buy him and play him as a ST.

So i was looking for a LF to play next to CR7 and my 90 George Best. Bought this guy and could not wait to get started. Played him as LF in a 4321 and as ST and CAM in a 352 formation.

He got completely outplayed by CR7 and Best. he feels slow and even clunky on the ball. He needs a lot time to control the ball and by the time he fires a shot it's usually too late. Best and Ronaldo where flying over the field, quick turning with great ball control and fast reactions while this guy felt sluggish and so much slower. When he got in a good position he was able to finish and his passing and strength were descent enough but for about 900k i aspect so much more. In one word: disappointing! Only played 5 games with him and put him back on the transfer market.