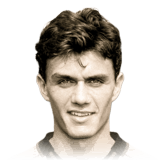 I stumbled across the 88 LB Maldini while looking for a left back that was suited to play CB. Like many others I had fallen in love with the 3 at the back formations, I experimented a long time with the popular 352, but for some reason its’ little brother 3412 seemed to work better for me. Maldini found his place at LCB, tasked with shutting down the Dembeles and Gnabrys that were bombarding the left side. For that reason I’ll review him as a CB, since I have little experience with playing him at LB. And to be honest, I think he performs way better centrally.

The first things you notice with the card is the 87 acceleration and sprint speed combined with excellent defensive stats, with a shadow chemistry style you can pretty much max out the stats in those departments. The agility/balance combo is also coming in at 67 and 69, meaning that for a central defender, this guy is rapid. He ticks most of the other boxes as well, solid short passing and reactions, good composure and appropriate workrates. The negatives are found in the physicality stats, with 79 strength and 66 aggression. He simply lacks the beast factor that you get with Van Dijk and Pique, where you just know that they are impossible to get past. If I were to play him at CB in a back line of 4, I’d without a doubt apply an anchor or even a sentinel.

Uniqueness and value for coins

It’s never easy to say yes or no to the question ”Is he worth it?”. His price is fair in my opinion, he’s around the same price as many other mid-tier icon CBs. The important question for me is, how much coins do you need to justify spending 450k on a CB? He’s a game changer of course, but so is van Dijk - for 100k less. The unique thing about Maldini is the pace/defending combo. The only two players to match both those stats are prime Carlos Alberto and Lothar Matthaus - both with a price tag of 2.3M+. We can talk all day about important stats in a CB, value for coins and if you’re better off with Lenglet, but there’s no denying that when it comes to pure pace and defending - Maldini is the best.

Don’t look past this card just because he’s a LB, either swap him to CB in game or play him on 7 chem. Maldini is considered one of the best defenders in Fifa, and even though his base card isn’t nearly as good as the prime, I enjoy trying out those players. You may say that Lenglet and Varane is as good as it gets, but trust me when I say that having an icon CB is very underrated.

I II bought Maldini because I wanted a different kind of centre back. this is one of the best decisions i have ever made. Never have I felt so comfortable with a centre back despite him being on 8 chemistry. Another aspect of his game which make him so unique is his low aggression. Usually centre backs are brutes trying to bully the ball of the attackers but Maldini is so calm in doing it and he wins the ball with ease most of the time. I strongly recommend this card.