I want this card to be good, I really do. 10 games in I feel like I have a pretty good feel for him and he's just...meh. FINISHING: You get this card for the insane shooting stats including 95 finishing, I expected this guy to be unreal inside the box, putting away almost every chance...he did not. Even with the hunter chem style his finishing felt so underwhelming, he'll put away less than half his decent chances per game. Long shots are pretty good, nothing to write home about. Finesse is pretty good as well. Didn't get any chances to test out classic van Basten volleys. Listen, the shooting is pretty good its just not amazing like you would expect it to be. DRIBBLING is pretty good, his agility is not the best and he feels clunky sometimes with the ball, but overall good dribbler (4 star skills is great). PACE was not great, this guy simply cannot get past defenders like Hernandez, Militao, Gomez, and others unless you are using skill moves and quick dribbling (which works a decent amount). PASSING was the most surprising attribute for me, even though his stats are mediocre in that area. His short and long passing were pretty damn impressive to me, especially one touch. Heading is irrelevant since it doesn't exist in this game. defending who cares.

The card is about 600k, and for a card that you are getting pretty much solely for the shooting, it should be 600k shooting and its not, its like 50k worth of shooting if that makes any case. I couldn't really tell the difference between his shooting and say Lucas'. Definitely not worth the price, but overall a pretty cool card as van Basten is an absolute legend. You should give him a try for a few days if you have the coins

finishing expectations (won't put away everything as you'd expect) 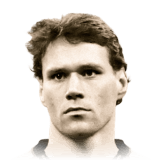 Casual Fifa Player here and was hoping to add someone dangerous into my squad. Been using POTM Toko Ekambi as a striker for a while now and had close to 300k in coins. Sniped this dude at 290k and was feeling pretty good. He had a hawk chemistry style and although a lot of people recommend a Hunter or Engine, I kept the dude with a hawk to try and test him out. I love Van Basten and felt that with this card he was going to ...
Read full review
0
/600
Update my avatar Dos and don'ts
Top Rated
New
Controversial
Show comments