First of all I want to say that EA will not release a free overpowered ICON even in Swaps ICONS,

So Michael Owen as all of Swaps ICONs he is NOT OP, but he's very good, he's similar to Prime Gary Lineker in Fifa 19 last year, because he's Fast and very good in dribbling with very good passes as FW.

He's a combination of Politano "storyline"- in his tall and physicality with baby Butragueno - in his dribbling and his stamina with the speed of Zaha "storyline".

First 6 : 8 matches he was an average player but after that he became one of the best players I have used till now, he has good finishing too, and the most thing you will notice about this card beside his dribbling and speed is his good positioning.

In my opinion Michael Owen is the best attacking option in Swaps ICONs 1, But again.. I want to repeat that he is NOT an Overpower card! 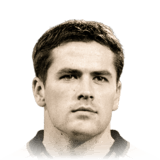 The best Player you can go for Icon Swaps

I couldn't pass on Owen, since i've played him in FIFA19 and was very happy with him. The meta for FIFA20 seemed to fit even more to a player like him, and i was absolutely right. He not only feels smooth with the ball when pacing away, he feels in general very "speedy". He always has the right timing to position himself and almost everytime he has the opportunity to score, IF you have the ...
Read full review
0
/600
Update my avatar Dos and don'ts
Top Rated
New
Controversial
Show comments