First of all, he's the 4th best striker in La Liga behind Griezmann, TOTG Benzema and scream Iago. That's saying a lot for 34K!!!

I've been using him for more than half of all the games i played in fifa this year and i'm really happy with him. He just scores, when you need him to score he does it. I've scored some amazing long shots with him, i've scored tap ins, goals from all kinds of angles. He isn't really the most agile player wich is his main downside in my opinion. How i like to use him is pass the ball to him with his back to a defender, run diagonally into the box, drag back and then finesse.

-Speed: I use hunter on him but he really doesn't need it, hawk would work best on him.

-Heading: if you get the ball on his head, he scores it's that simple 93 heading accuracy is great

-Keeping the ball: When you give him the ball he doesn't let go of it easily, he's not the most agile player but he does have good ball control

-Finishing: He really has a rocket in his leg, the power behind some of his shots is insane and 89 finishing for his price is amazing

-Workrate: High/Medium means he will run when you need him to, 'nough said

-Agility and balance: He doesn't switch direction fast enough and can easily be tackled when trying to dribble

-Skills: 3 star skills means you can't do the berber spin wich i really enjoy and there are lots more useful skill moves he can't pull off 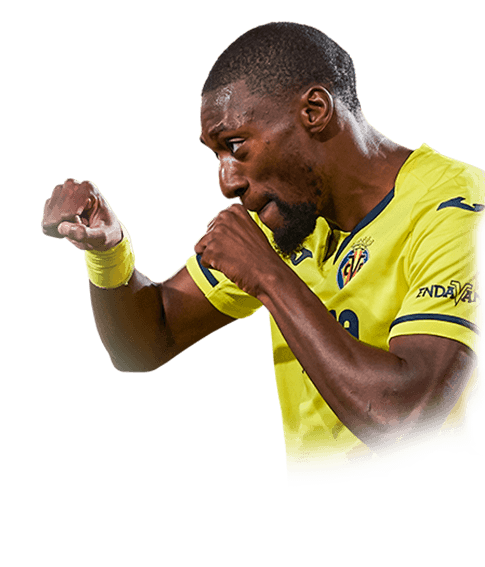 So far i've been using many La Liga strikers. Played bunch of games with Aspas, Rodrigo, Morales and Williams, who's played over 200 games in my squad. Every one of them was good, but had one significant disadvantage, i.e. Williams had 2* WF. Last time I've tried Ben Yedder in hybrid. He seemed very balanced and decent striker, but it all changed because of Cameroonian striker from Villareal, Karl Toko-Ekambi.
Read full review
0
/600
Update my avatar Dos and don'ts
Top Rated
New
Controversial
Show comments