Before i begin, i must say i have given up on playing weekend league because it is absolutely the worst experience you can have in any game ever. Other than than, i am an decent player, finished consistent Gold 1 ( sometimes gold 2), but now i am playing this game only for fun because the competitive aspect is literally broken.

I have been using this player for about 3 weeks now. All i can say is that he is very fun to use. He basically made me tolerate this "horrible" game again.He is one of the cheapest icons possible and believe me, he is very very usable.

Most of you see the balance and agility and you don't care about anything else, but this card is very unique.

First of all he is left footed, which is incredible if you play 41212 narrow and want to use other striker than griezzman (which 99% of people use and it's boring to use the same player over and over)

4 star weak foot makes his right foot almost as dangerous as his left. But believe me, his left foot sends rockets

Traits: Finesse shot and Power header. Yes, finesse shot, you heard correctly. he bangs finesses with his left almost every game. The finesses are not "messi-like" but very dangerous if you let him set up his finesse.

Another pro is that absolutely no one knows he is left footed, so everyone will try to block his right. I had numerous opponents who tried to block me on his right foot only to leave a huge gap on the left and i scored with his left foot. This thing alone can win you matches

91 Strength. Yes. 83 Acceleration and 91 strength while being 6'2. He's stature in the game is massive, almost like Van Dijk. He pushes absolutely anyone off the ball if you time L2/LT correctly. Very very strong player.

Bottom line, TLDR : very usable card. Yes he is clunky, but makes up in absolutely any other stat. Very unique player if you are tired of the same Ben yedder-dembele combo or whatever.

I suggest playing him with a "meta "striker so you complement his strength with the agility of a meta player. I think he is a hidden gem and he will stay in my team for a long time.

Will he bring you Elite in weekend league or 2500 SR in division rivals? HELL NO. But if you're tired of playing the broken competitive WL and actually want some fun in this game, this is your man.

Shot Power (Shot in general, but his shot power is mental)

Can actually score headers with his Power Header trait.

His hair is amazing in-game

Clunky as a truck 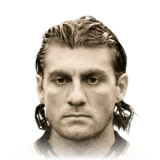 will list out the pros and cons for this player including style of play chem stylepros excellent physical he is so hard to get of the ball and sometimes can also just push defenders who have the ball and steal it.van dijk had trouble with my vieri
Read full review
0
/600
Click here to verify your account in order to comment Update my avatar Dos and don'ts
Top Rated
New
Controversial
Show comments