Because I didn't feel like deranking for Icon Swaps I just did squad battle objectives and the easy online objectives. Unfortunately I ended with 10 cards so I couldn't get Roberto Carlos and had to look for another icon that seemed good. Okocha seemed to have a lot of good qualities even tho at first glance his pace and shooting are obviously not optimal. I figured a chemistry would fix it, together with a 4* 5* combo, this was the man I chose to get.

I've just played my first WL with Okocha in the team and ended on 20 wins. I usually sit around 17-20 wins so I think he has slightly improved the squad. The first 10 games I used him as a winger in a 4-3-3 attacking formation with a hunter chemistry style. Even tho this helps his worse stats a lot he definitely doesn't turn into a fast winger. He's an immaculate dribbler and can do a lot with 5* skills aswell but I never really got him into a lot of scoring opportunities coming from the sides. Because of that I swapped him to CAM ingame, put a deadeye on him and that's when I really felt his power. If you're a good dribbler you can easily find a shot after beating just 1 defender. With a deadeye his shooting is actually really good and he will find the net with both feet. And because of his high passing attributes he is also very good for fast link up play.

The only thing I've noticed as with most CAM's is that he will get pushed off the ball very easily, he's not someone to just hold the ball. He's also relatively small and while I think it improves his dribbling, it makes it easy for defenders to take the ball off him while he's being played in. I did notice that in my last games, aggressive CDM's like Kante take the ball from him away that way quite often. CAM's also use quite a lot of stamina. I started using a squad fitness every 2 games, because when I didn't I definitely felt him getting worse by the third game.

Shooting is also amazing if you use Deadeye

Stamina (This is actually a big con, but with the right player instructions it will not be a massive problem) 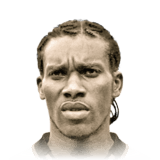 Jay-Jay Okocha is the perfect CAM in a 433(4), he is faster than what the card says he is. He also have great long shots and finishing, he always find a way to pass the ball. He is also so smooth on the ball. The only problem is his stamina and strenght. Definently worth 8 Icon Swap cards.
Read full review

I wasn't sure if I should get Okocha or Guardiola from icon swaps with my nesta. The deciding factor for me was the 5 star skills and the link with my POTM Osimhen. At first, I tried him with Hunter and he was good, but sometimes his passing let me down. I also tried deadeye but his shots didn't seem as accurate, and he was alot slower. For a while I used him as a sub and he made a huge impact off the bench. A few weeks lat...
Read full review
0
/600
Update my avatar Dos and don'ts
Top Rated
New
Controversial
Show comments