Alright, so I don't write many reviews due to the time it takes, but for this man, I just have to. I managed to pick him up just today and played a limited amount of 5 games with him in Champs. You may already be turned off, but, I have used Vieri every year since Icons are in the game because he used to be one of my favourite footballers and since stats don't change, I know what he's all about. Obviously gameplay changes, but I've played enough games to know what this year's like. One final thing before I start talking more in-depth about the card, keep in mind that I used him in a 4231 as a solo striker, with the Marksman chemstyle.

As all of you know, this year's game is perfectly suited for smaller type attackers with great Agility and Balance (Mertens, Messi, Insigne, that type) and you instantly will notice that Vieri does not represent this style of play, due to his height and lackluster combination of the aforementioned stats. But, this does absolutely not mean that he is not playable, at all! You will need to use Vieri as a striker that can properly hold up the ball and every now and then make a run in behind, but do not expect him to beat defenders left right and center. His pace is not bad at all for the type of player he is, and if you set him to get in behind, his excellent positioning will allow him to often find gaps in defenses through which you can play balls and, crazily enough, defenders won't have an easy time catching up with him at all.

Then I'd like to cover his shooting. The stats on the card say it all. 94 Positioning, Finishing and 91 Shot Power without a chem style is already ridiculousoly good. If you manage to get Vieri onto that left foot, it's over. He is so, so composed in any situation. Furthermore, his regular and low-driven shots are so strong, and the accuracy is so perfect, that no goalkeeper will be able to deal with his shots properly at all. In addition to that, his finesses are top-notch as well. His weak foot does not quite feel as much of a cheat as his left foot, but it definitely feels like the 4 star and he will have no mercy either on his 'weaker' side.

I used to have Crespo in his position, but just like last year, despite him being extremely good, I just really disliked his low passing. And despite Vieri's vision not being that great, it's really enough for him to assist teammates and play those throughballs for either your wingers, outside CAMs or your fullbacks, because of his excellent 85 short passing. I've barely used a better passing striker in any FIFA, ever. Maybe the Icon factor playing a role here.

As I've shortly spoken about a bit higher up here, his dribbling is nowhere near that of a Messi, Pele, Cruyff, or Zola. I wouldn't say it's terrible though, it is definitely good enough for him, but because of his lack of mobility, he can't fully take advantage of his pretty solid ball control and dribbling stat. Nonetheless, I still think his dribbling, for a target man type that he is, is pretty well-rounded. And as it is in the dribbling reactions, I'll talk about his reactions here as well. As you would expect with 88 Reactions, (93 with Marksman), Vieri quickly reacts to any loose ball or any situation as you would expect him to. I haven't had a single moment in which I'd be like: 'Damn Bobo, should've reacted to that'.

And then, Bobo's physicality. This man is an absolute tank, having no trouble shrugging off even the toughest defenders, even the likes of Koulibaly (!), VVD, Scream Pique and such. I can't recall him in the games that I've played, him ever being bullied off the ball, because of his excellent strength and his special posture. His posture in-game is similiar to that of Akinfenwa and that may be a different reason as to why it is basically unable to push him off the ball. His ability to head the ball is excellent as well, I've been able to score one goal off a corner, but he does definitely not win all aerial battles despite having fantastic jumping with the boost of the chemistry style. This is barely relevant however, as who even uses heading this year? It's basically useless.

Lastly you may be wondering, Med / Med workrates, will that be a problem? Absolutely not, you won't even notice the difference with a High / Med card. In addition to that, these workrates allow him to last the entire game better than if he'd be High / High.

Concluding this review, Bobo is an absolute unit that will give a significant boost to any attack and will terrorize defenses and tear them apart with relative ease as long as you play him right. I'm repeating it once more, he is a target man, not a dribbler. Totally worth your coin invests and I doubt I'll be selling him anytime before his Prime Moments card is released.

Thank you for reading and I wish you a wonderful day! 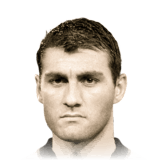