This is the only review you will ever need. This monster is the hidden gem of the game and I was skeptical when I packed him. Been using Cancelo for a while now in my Premier League setup and also have Walker, Trent and OTW Wan Bissaka. But this card has just invalidated their existence. EA has created the game so that small fast speedy ballerinas with 5 star skill moves and fragile bodies dominate the game. And this guy is a brick wall at right back. The number of times an Ousmane Dembele has wandered into the jaws of my Sidibe and get clattered like a porn actress in a casting couch cannot be counted with 20000 hands. There is only one winner and this guy is like Khal Drogo against the Khaleesi. Don't let that smile and the stats fool you. That is the smile he gives when your favorite 5 star skill move 'meta player' gets crucified and left in a heap as Sidibe casually strolls past him.

Throw an anchor on him and pair him up with the demonic Futmas Gbamin and you start laughing when people throw millions of coins into Prime Icons. Gbamin and Sidibe is like Ornstein and Smough, Going against Sidibe and forgot to use a skill move? It's his ball now. Your rights to having the ball and a counter attack has just been forfeited, welcome to the Sidibe show. Running on a budget and wanna use a cool card? This boy right here packs a punch. Only way to beat him is to be extremely good with skills (although getting past him is still a 50/50) or passing the ball away. Although with FUTMAS Gbamin patrolling the edge of the box it's basically out of the frying pan and into the fire. He also boasts the warp technique granted by EA where even if you mistackle and get caught totally out of position, you have a high chance of warping back to your original spot. Made me chuckle once when a Prime Crespo 'got past me' and fell to the 'Sidibe shuffle' where he rotates 180 degrees and warps back into position just in time to initiate another tackle. Solid cheap buy 1000/10 will recommend.

Defensive beast (Don't send him up too much) 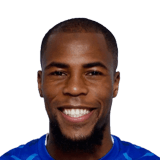